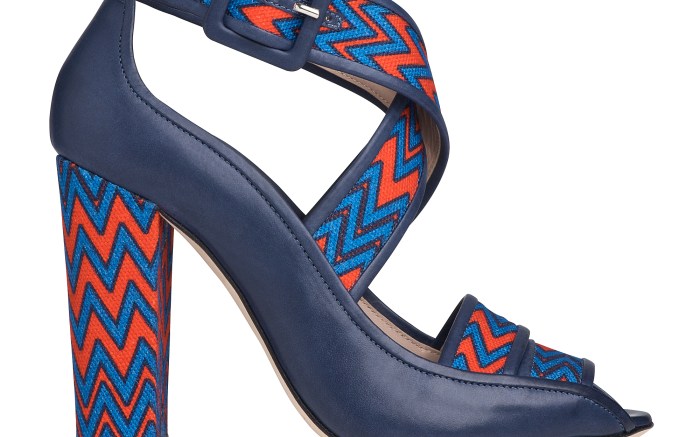 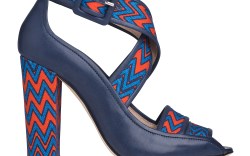 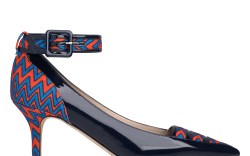 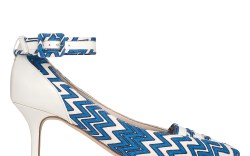 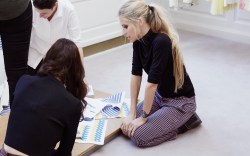 While best known for keeping the Duchesss of Cambridge well-shod, L.K. Bennett has brought another British style-setter into its fold.

Model, writer, jeweler and all-around fashion plate Laura Bailey has collaborated with the accessible luxury brand on a limited-edition collection of five footwear styles and a clutch, available now. Prices range from 195 to 295 pounds (about $290 to $439).

“They genuinely reflect my passion for travel,” said Laura Bailey of her Rivera-chic pumps, open-toed flats and block-heeled sandals, all in a sunny seaside palette with graphic zigzag prints that call to mind sails, swimwear and parasols. “I wanted to capture my nostalgia for the Antonioni film world I love with my much more edgy and modern London life.”

On the phone from across the pond, Bailey gave FN the scoop on her very first shoe designs.

How did you decide on the theme for this collection?

LB: “The starting point of the collaboration was my trips to the Almalfi Coast in Italy. I had recently returned from there when we began, so it was fresh in my mind. It’s a part of the world I know very well from trips over the last 20 years. Because the collection was going to be for spring/summer, I wanted it to be very much holiday and travel-inspired.”

How did you incorporate this into your designs?

LB: “It was a combination of the vibrancy of the colors and the natural setting and the beaches and bikinis. But the main catalyst was a group of very graphic and bold vintage swimsuits I found on eBay. I combined images of them with my own snaps of the Almalfi Coast over the years, plus film references from the ’60s and ’70s. I even found some more vintage swimsuit inspirations on Portobello Road. We then played with proportion and randomness versus more mathematical variations until we achieved what we wanted. I relied on a lot of technical support from the L.K. Bennett team for the sampling process and production.”

Had you ever worked on a footwear project prior to this?

LB: “Never. I’ve worked with leather on bag projects and I currently work with jewelry, but this was a new challenge. I’ve been collecting vintage shoes and sandals over the years, which was helpful for this project. Like most women I know, I’ve got quite a good collection of shoes in the back of my closet! That really helped me find the slightly retro infusion for the shapes.”

Why did you decide to take on this project?

LB: “I felt like I was following in good footsteps because my friend Caroline Issa had done one a couple of years ago with L.K. Bennett, and I thought she did brilliantly, really stamping her style on that collection. In a way, she was my model for how it could be done. And then they also collaborated with Rosamund Pike, who is a friend of mine. I was in good company and was flattered to be asked. I’m very busy and have quite a few criss-crossing professional lives, so I’m trying to be careful about what I commit to. I’m a 100-percent type of person and way too opinionated and controlling to just phone something in. I genuinely thought this would be an opportunity to learn, and I liked the team from the initial meeting.”

Which style do you think you’ll get the most wear out of?

LB: “I really like the chunkier heel of the Claudia — that’s the one I’ve been wearing the most. But I also love the lower heels, such as the Silvana. They are filling a void in my wardrobe, and I’m enjoying experimenting with a lower heel. It’s been fun because I’m just starting to see them being worn by my friends and coming to life.”

How will you be styling the shoes come spring?

LB: “I like them with a midi skirt or a very classic black dress or a sundress, like some of my old Miu Miu dresses that I’ve had forever. Because the footwear prints are quite bold, I like them actually counter-positioned. I’ve been also wearing them with checked trousers, a polo neck and jacket, as it’s not quite spring weather here in London yet.”

What was the greatest lesson you learned from entering the world of shoemaking?

LB: “There was a big technical learning curve. I also learned a lot from the edit. A capsule collection should be really tight, and I found probably the hardest part was refining the line from six or seven samples to five styles. It was also about learning who their customer is, my reach and where that crosses over. It’s been really interesting. I genuinely am fascinated by the whole marketing aspect of these projects as well.”

For people who aren’t familiar with your work, how do you describe what you do?

LB: “I usually just say I’m a mum. I have a jewelry line [Loquet], and I also work with British Vogue. I’m speaking at their Vogue Festival soon, and for that I will be presented as a model/writer and contributing editor. It all depends on the day and what I’m doing: modeling, art directing, designing or all three.”