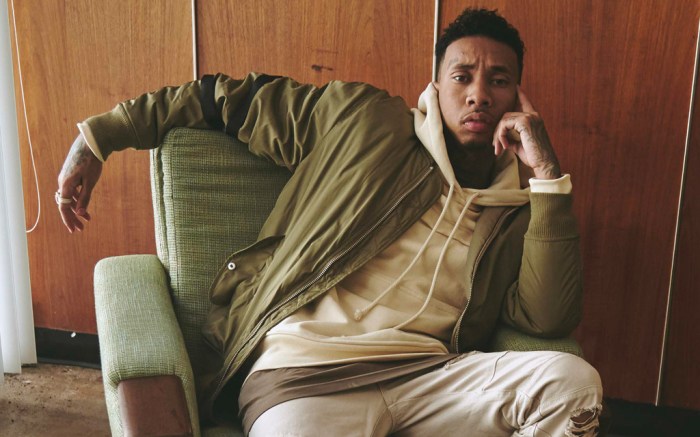 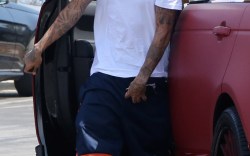 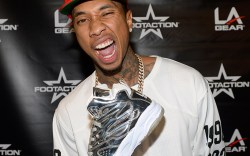 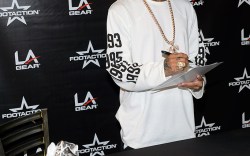 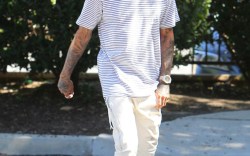 From his music to his fashion sense, rapper Tyga is West Coast through and through, as FN learned during our cover shoot and interview with him.

“Being from L.A., I like light shoes. I’m not into anything heavy. I like Vans, classic Chucks — very California. The whole culture of rap inspired my style. It comes from the streets and having nothing. You just want to prove you can make it out of your situation. Sneakerheads collect the craziest, most expensive shoes because you couldn’t have them when you were a kid. When you have the money to do it, they are more meaningful. A lot of artists are doing collaborations with fashion designers and brands. We’re all trying to move the culture,” Tyga told Footwear News on location in Los Angeles.

Just last month, the rapper and self-confessed sneakerhead, hit the Las Vegas strip to launch his latest L.A. Gear collaboration. The Liquid Silver L.A. Lights sneaker was the next silhouette following the pairings first release of the Liquid Gold L.A. Lights shoe. But sneakers have been in his DNA since long before fame reached him.

“When I was 12, I used to go on a site called  Niketalk.com to see all the best shoes. Then it was eBay. It was crazy to me how much more was out there than I realized. I got into Jordans, BAPEs and custom Nikes. I always had fly shoes when I was little.”

“My most special sneakers [growing up] were the Jordan 17s. They came in a briefcase, and I took them to school with me with my homework. It felt like I knew I was worth something. You know, sneakers just complete the outfit.”

Another fashion necessity? The 424 denim jacket he wore for the cover shot, which girlfriend Kylie Jenner (and FN cover model herself) was seen wearing a few days later at the Glamour Awards in New York City. According to Instagram, they also share a love of the new Yeezy Boost 950 boots, another style Tyga sported on set.

“It’s winter and these just feel right. I’m lucky I don’t have to try and hunt them down online anymore. I like getting things first,” he said on how the Jenner connection ensures he gets included on Kanye West’s family sneaker order. And while the duo posted a picture of their his ‘n’ hers Yeezy’s, Tyga likes to tread lightly when it comes to social media and shoe-bragging rights. “I try not to overdo it with that,” he said. “Though Instagram is basically all about overdoing it.”

Between shots, FN got more shoe scoop from the rapper.

Sneakers and fashion go hand and hand these days. Who are some of your favorite designers?

“I respect a lot of different brands. It’s no longer about a top five designers. There is so much newer younger energy these days. A lot of it is coming out of here, in L.A. 424 is a brand I like that is coming up. I like Yeezy’s whole line. I think Olivier [Rouesting] is a really good designer too. There are so many people doing cool things these days that it’s really hard to pick a favorite. It’s the same with music. There are so many options out there now.”

You arrived today wearing the new Yeezy 350 boots with a head-to-toe Yeezy look. What do you think it is about what Kanye West has done that has resonated so successfully?

“When he believes in something, he believes in it whether people don’t like it or like it. He’s going to do it anyway. Once people realize that, they take their barrier down. A lot of people judge things based on perception and don’t actually give it a try. Once they do, they like it and realize what he’s trying to do, on all levels. I get what he’s doing musically and am a fan of his as an artist and his drive. Everyone has different tastes, but right now, this is how I’m feeling like dressing.”

How many pairs of sneakers do you have?

“I’ve got a lot of shoes, but I don’t like to wear a lot. I tend to wear my top three or four. I have over a hundred for sure, but I’m always giving pairs away to my friends or loosing them.”

Can you recall a pair of shoes that coincided with a career highlight for you?

“Early on, I did a deal with Reebok and it was one of the biggest signature shoes they had since when Jay-Z and 50 Cent and Iverson had their shoes with Reebok. We sold a lot of pairs of those. That was around the same time I had my first hit. Everything was just going how I wanted it to go. At that point in time, that shoe really meant something to me.”

All sneaker heads have a certain shoe they buy in bulk. What’s yours?

“I’m such a fan of all white Vans. It’s the Cali boy in me again. I just love all white shoes. You can only get like two wears out of them, it just kills me. I buy like five at a time. They just get dirty so fast. You want something to always fit like when you first buy it. That feeling when you first it on.”

To explore Tyga’s sneaker style, click through the gallery below.