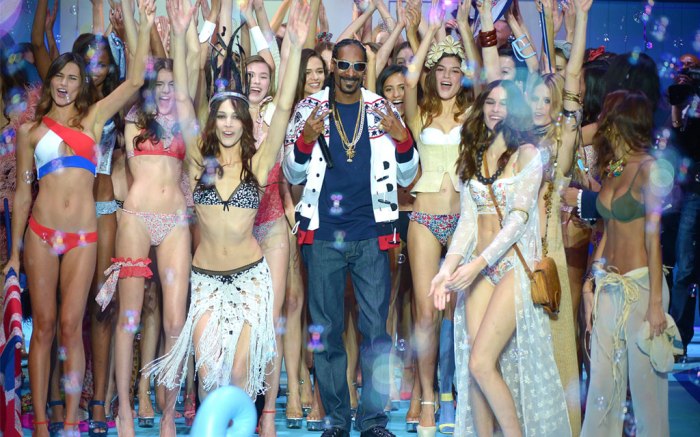 London now has the Victoria’s Secret Angels (and Taylor Swift), but Paris has the Etam models and Snoop Dogg. The French lingerie line invited the rapper to perform at the runway show yesterday, which felt more like a production than a presentation.

Snoop took the stage in monochrome black sneakers, plenty of gold chains and Wayfarer sunglasses to perform “Drop It Like It’s Hot” while bathing suit-clad models took their final runway walks. There were also plenty of inflatable pool toys and bubbles in the air, making for one fashion-y pool party.

The trends coming out of Fashion Week should be good news for the California rapper, who has said he gets most of his inspiration from the ’70s. (Fans should look no further than his vintage “Sensual Seduction” music video.) There are plenty luxe looks coming out of men’s and women’s Fashion Weeks inspired by the era.

Also spotted around Paris Fashion Week was the always unpredictable Solange Knowles, who stepped off a plane wearing all white and neutral, trend-right chunky heeled mules, publicly shaming the rest of the world who cannot wear white when traveling and do not look like they’ve been at a spa after getting off a 10-hour flight.