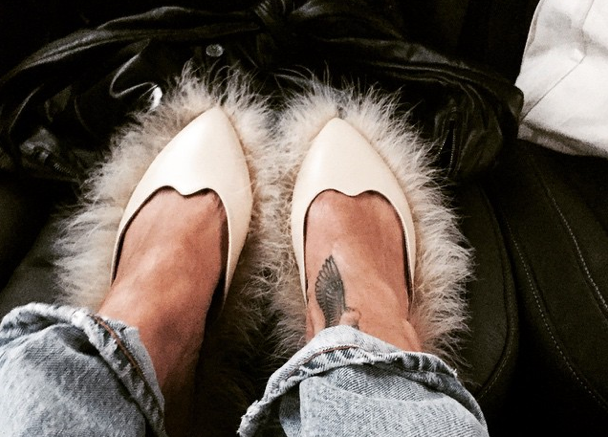 It seems that Rihanna is the most willing starlet to take on this fashion season’s most eccentric trend — the singer was spotted wearing fur-tufted Simone Rocha shoes at Paris Fashion Week.

Furry footwear was all over Milan, from little hints at Rupert Sanderson to full-out fuzz at Gucci and notably Fendi. Rihanna’s slippers made their debut on Instagram with the caption “Paris.” Whether you think they’re a built-in floor duster or chic statement shoe, Rihanna is, at the very least, willing to give it a go.

Earlier in the fashion marathon, the “Diamonds” singer was spotted in the enormous platform lug-sole boots shown by Alexander Wang at New York Fashion Week.

What shoe trend will the bold fashion fan embrace next?

Shoes have been getting plenty of love on social media this week. Blake Lively took to Instagram asking fans to help her pick out a pair of shoes to wear. The starlet ‘grammed a strappy heel and a color-blocked flat by New York designer Sarah Flint. Her hashtag not so subtly described her predicament: