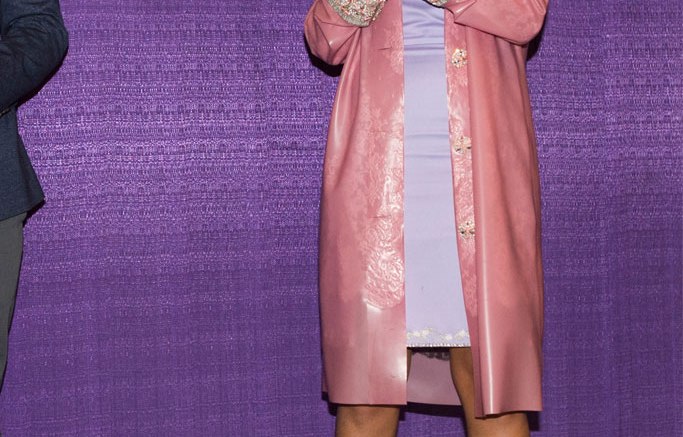 Could Rihanna have a new favorite shoe? The singer has been spotted twice in the past week wearing Holly Fulton’s pretty pastel heels at press events for the upcoming animated film “Home.” Rihanna lent her voice as one of the main characters, along with Steve Martin and Jim Parsons.

Scottish designer Holly Fulton teamed up with Christian Louboutin for the shoes shown in its fall ’15 collection at London Fashion Week.

On Friday, Rihanna was spotted wearing the pink version with a Pascal Millet pink jumpsuit for a “Good Morning America” interview, and yesterday she wore a lavender version, paired with a purple dress and a pink coat for a screening in Plano, Texas. The pretty suede style, adorned with sweet jewels and a tall high heel, are perfectly playful and appropriate for the press outings for the children’s film.

On Sunday in New York, Rihanna was seen promoting “Home” in Manolo Blahnik heels paired with black socks and an emerald Adam Selman dress, tapping into the growing trend of styling socks in a more sophisticated way.

The singer made headlines last week after being named the first black woman to appear as the face of Dior. We’re eager to see how she continues to develop her unique shoe style, which is one of the most diverse and daring around.