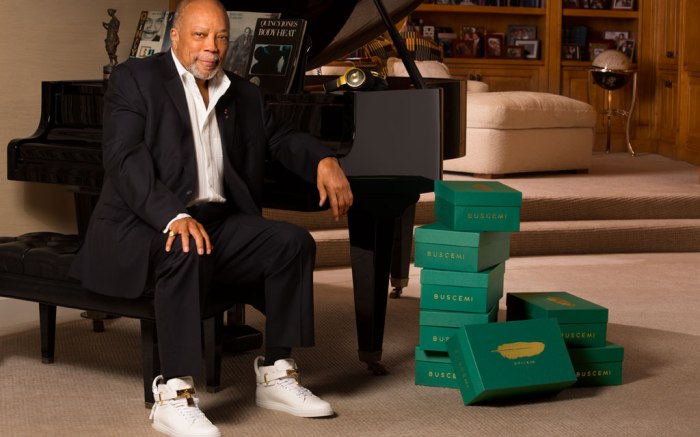 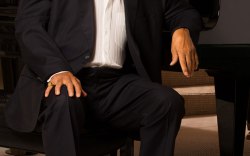 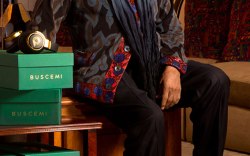 Legendary record producer Quincy Jones has been tapped as the face of Buscemi’s spring ’15 campaign. The images, shot in Los Angeles by Greg Gorman, feature Jones in a variety of the brand’s signature luxury sneakers.

The campaign has Jones sitting at a piano surrounded by Buscemi shoe boxes, sporting different white and black leather high-tops. The images are already up on major billboards around Los Angeles, where the brand is based. An image of a billboard on Sunset Boulevard can be seen on Buscemi’s Instagram page.

“We’ve dreamt about featuring Quincy since the beginning. it just took two years to make it a reality,” said founder Jon Buscemi. “Working with Greg Gorman … are you kidding me? They got along like schoolyard pals, and the shots came out perfect. We are honored to be among such legendary champions.”

This isn’t Jones’ first time in a luxury footwear campaign. Back in fall ’06, he appeared in ads for Jimmy Choo alongside model Molly Sims.

Buscemi was founded in 2013 by Buscemi, the former founder of Gourmet. Since its launch, the brand has attracted a large roster of celebrity fans, including Diddy, Jennifer Lopez, Justin Bieber and Jourdan Dunn. It is currently stocked at Kith, Barneys New York, Neiman Marcus and Holt Renfrew, among other retailers.

Fashion brands thrive on using celebrities in their advertisements. Stuart Weitzman featured supermodel Gisele Bündchen in its spring ’15 campaign, while John Varvatos kept to its musical roots with the Marley Brothers.

For more images from the campaign, click through the gallery.