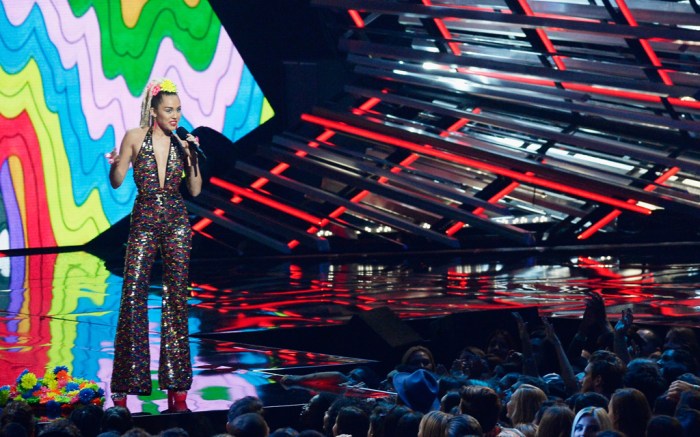 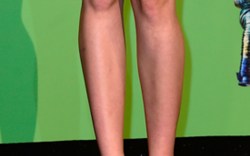 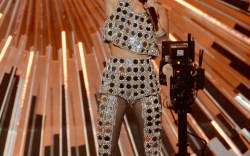 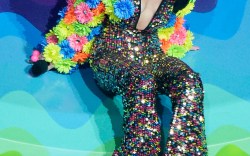 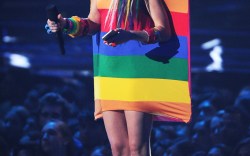 Miley Cyrus almost literally bared all while hosting the 2015 MTV Video Music Awards. The “Wrecking Ball” singer sparked some expected controversy with her revealing outfits, an exposing wardrobe malfunction, explicit language and a marijuana-inspired closing performance — but she did ace her VMAs shoe game.

Cyrus arrived at the MTV VMAs red carpet in a barely there Atelier Versace outfit, paired with the night’s trend of thigh-high boots.

Later in the night, Cyrus changed her costume and donned a different pair of thigh-high boots by Versace. She wore those white thigh-high boots with multiple outfits. Rihanna wore the same Versace boot style in green at the 2015 iHeartRadio Music Awards in March.

One of Cyrus’ best looks of the night was her head-to-toe Prada ensemble, including metallic platform sandals. The host wore the same Prada shoes when she hit the stage in a silver thong leotard and then after the show in the MTV press room.

Cyrus’ antics delivered many of the night’s most memorable moments — and the Parents Television Council was not happy about it. “MTV had an opportunity to use its powerful VMA platform to stir a young audience to aspire to something positive and uplifting. Instead, they chose to perpetuate blatant sexualization — much of it self-inflicted by the artists — and to celebrate the use of illegal drugs,” President Tim Winter said in a statement. “MTV and Cyrus could both be forces for something positive, but tonight’s VMA partners relied on exposing millions of children to graphic, inappropriate and far-too-frequently-offensive content.”

According to Variety, the 2015 MTV Video Music Awards is now the most-tweeted non-sports program since Nielsen began tracking Twitter TV activity back in October 2011.

Click through the gallery below to see more of Miley Cyrus’ outrageous VMA styles — and check out the best red carpet shoe looks of the night here.