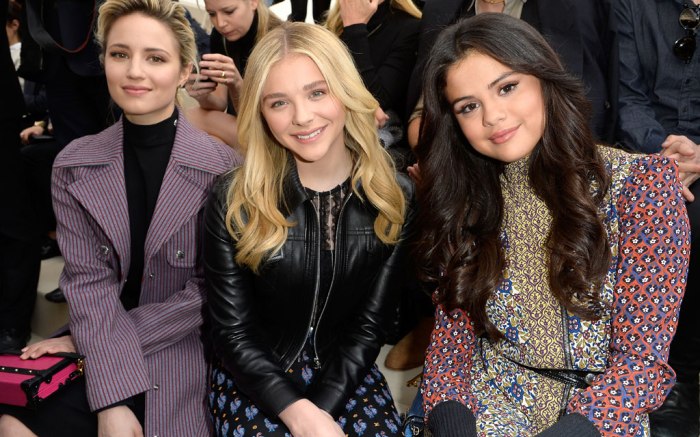 Williams, one of Louis Vuitton’s famous campaign faces, opted for the designer’s spring ’15 glossy patchwork half-boot. This style seemed to be the most popular of the day, with both Dianna Agron and Gomez sporting the shoe. The maroon-and-black ankle boots feature a chunky heel shape reminiscent of the iconic LV monogram flower. See a close-up of Agron’s shoes below.

Of course, Kanye West and Kim Kardashian couldn’t miss a show in Paris. The two have made headlines all week long for Kardashian’s blonde bob and West’s surprise performance for Foundation Louis Vuitton. Kris Jenner took to Instagram to show off her night with the models, including daughter Kendall Jenner, at her son-in-law’s concert.

Miu Miu was the only show that Zellweger had flown to Paris for. Why? “It’s a reunion with our friends, are you kidding?” the actress told FN’s sister publication, WWD.

Check out the gallery above to see these leading ladies front row at PFW.