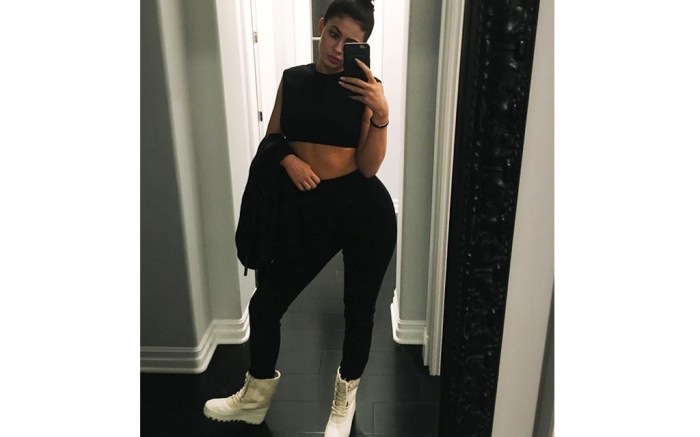 We knew it wouldn’t be long before the Kardashian-Jenner family was spotted wearing Yeezy Season 1. When the black Yeezy Boost 350s dropped in August, the family was immediately seen out and about wearing their pairs.

Kylie Jenner is the first to wear the Yeezy 950 boots, which are sold out virtually everywhere they were offered. She sported the beige style with black leggings and a crop top.

Sister Kourtney Kardashian posted a photo on Instagram over the weekend of a pair of Yeezy Boost 350s. At first glance, they looked to be the gray colorway released in June. But with closer examination it seems Kardashian’s are a lighter gray than the previously released pair and have a different greenish sole as opposed to white. The sole color could indicate that they will be glow-in-the-dark. This colorway is reportedly dubbed “Moonrock.”

Kardashian offered no explanation in her post, simply telling her followers, “Mornin!”

We hopped the fence!…anything for an early morning carousel ride with my boo.

The next colorway of the Yeezy Boost 350s will be released Nov. 14. It is widely thought to be the beige, but now Kardashian has us wondering if it could be “Moonrock.”

Footwear News recently announced that we will be honoring Kanye West with the “Shoe of the Year” award for the Yeezys at the FN Achievement Awards on Dec. 2.

Click through the gallery to see celebs wearing their Yeezys.

How To Get The New Adidas Yeezy Boost 350s

A Closer Look At The Yeezy 950 Boots