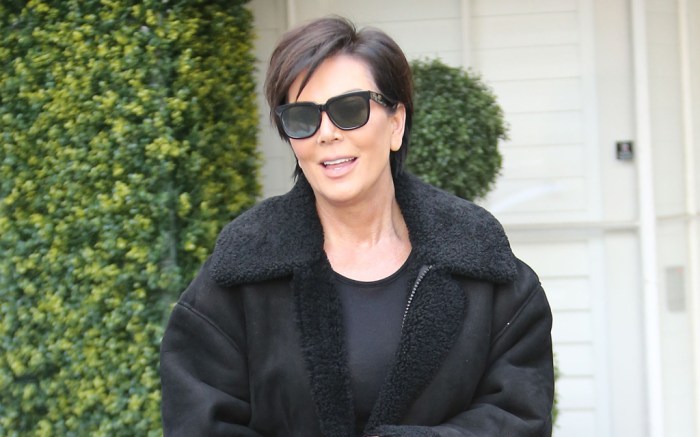 Kardashian family matriarch Kris Jenner is the first in the family to be spotted out and about wearing the all-black Yeezy Boost 750s — aside from Kanye West, of course. Kylie Jenner shared a photo of her 750s and a tan pair of 350s last week, but she hasn’t been seen wearing them yet.

Over the weekend, Kris went to a salon in Beverly Hills wearing her black 750s, which were released on Saturday. Her boyfriend, Corey Gamble, wore a pair of yet-to-be released tan Yeezy Boost 350s, the same colorway that Kylie showed off.

Some believe that this tan pair could be released before the end of the year. Most retailers ran raffles for a chance to purchase a pair of the limited-release sneakers. The first gray 750s were released earlier this year.

Brooklyn Beckham also has a pair of the all-black sneakers, in addition to a handful of other pairs of Yeezys.

As with all of the Yeezy releases, many people who were able to get their hands on the sneakers are already selling them on eBay for close to $6,000, forcing those who really want a pair to shell out serious cash.

Milan Shoppers On The Hunt For Black Adidas Yeezy 750s