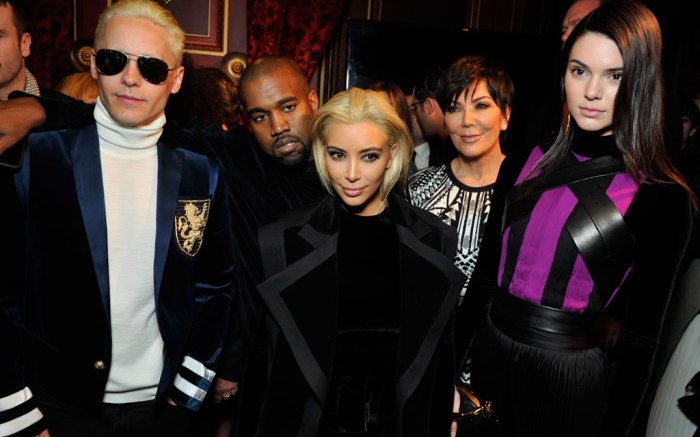 Kim Kardashian and Jared Leto, both newly blonde, took to the front row at Paris Fashion Week to show off their locks — and shoe looks. Kardashian, seated beside husband Kanye West (who joined Jane Birkin on the FROW yesterday), wore head-to-toe black to play up her new ‘do. The reality star’s penchant for strappy and seductive footwear is long-documented, so you can imagine FN’s surprise at seeing her in opaque tights and matching pumps.

Kim and Kanye were joined by Kris Jenner, in black leather ankle boots, as they watched Kendall Jenner walk the runway at the Balmain fall ’15 show. The family was seated between stylist Charlotte Stockdale, who wore shoes from the Nike x Riccardo Tisci collaboration, and “Gone Girl” actress Emily Ratajkowski, wearing Balmain.

Check out the gallery to see more stars on the front row at Fashion Week.

While the show’s shoes were top-notch, all eyes were on the new blondes. Leto caused quite a stir — and prompted some extreme fan reactions on Twitter — when he chopped and dyed his locks for the upcoming film “Suicide Squad.” But Kardashian grabbed the spotlight with her own lighter locks.

She posted a pic of herself at the salon, giving fans the first glimpse online:

Not to be outdone, Leto shared a shot of his hair and a note about his feet, straight from the runway:

Earlier today, at Carven, Solange Knowles turned heads in all red offset by Malone Souliers’ lace-up Montana pumps in napa leather. And Knowles wasn’t the only style icon at the show. Beyoncé’s younger sister shared the FROW with Olivia Palermo, Josephine de la Baume and editor Suzy Menkes, among others.