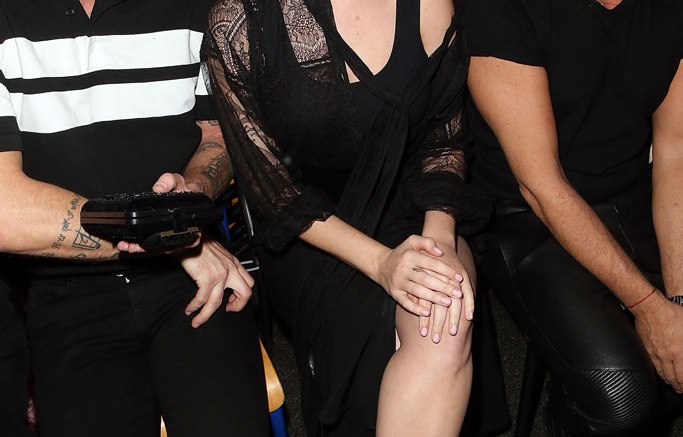 As Fashion Month nears its conclusion, some of the biggest stars stepped out in the City of Light. Givenchy, whose show was much discussed for designer Riccardo Tisci’s creative use of gemstones (new trend: facial embellishments?), also drew quite an impressive crowd.

Kim Kardashian was in attendance, as expected, as were Amanda Seyfried, Jessica Chastain and Katy Perry, the last three all in in top-to-toe back. While Seyfried and Chastain stuck with classic heeled sandals, Perry went with a strappy option. Kardashian, meanwhile, stayed at the other end of the spectrum in an ivory look with blush-colored heels.

Olivia Palermo was also back on the show circuit. The tastemaker worked two different suede looks over the weekend, confirming her style prowess.

Lorde has also been making the fashion rounds.

The “Royals” singer posed for pics on the front row late last week beside “50 Shades of Grey” star Dakota Johnson. Over the weekend, the New Zealand native stepped into some black sandals as she took in the Chloe show beside a host of international bloggers, including Leandra Medine and Chiara Ferragni.

Can’t get enough of Fashion Weeks?

Check out the best street style spotted from Paris to New York, and tell us your pick for Most Stylish Fashion Capital @FootwearNews.