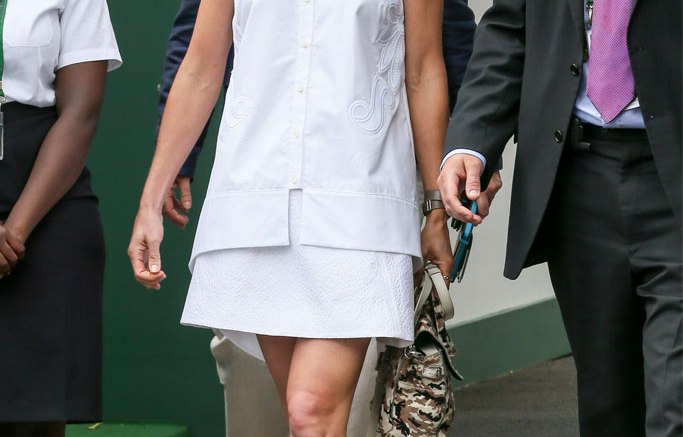 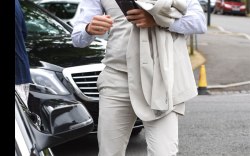 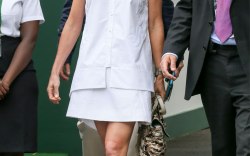 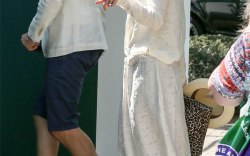 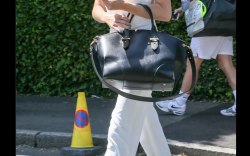 Wimbledon always promises a bit more of a fashionable take on and off the tennis court.  While there is plenty of on-court drama at Wimbledon, the stars seem to be keeping it easy this year when it comes to apparel and footwear.

Over the weekend, Rosamund Pike was spotted in a pair of nude smoking slippers that had a modern spin with a bit of a block heel. Bradley Cooper and Benedict Cumberbatch also stepped out in their best for the men’s finals on Sunday pairing their suits with dress shoes.

Simple dresses and separates, paired with chic heeled sandals, seem to be a big trend. Earlier last week, Chrissy Teigen and husband John Legend landed across the pond for the event. Teigen paired her slim summer dress with a pair of Nudist sandals by Stuart Weitzman, while Legend wore his summer blue suit with a pair of white dress shoes.

Pippa Middleton nabbed attention wearing a full-patterned look with a chic pair of sandals at the Andy Murray vs. Roger Federer semnifinal match on Friday. Her sister, Kate Middleton, and husband Prince William — who have been in the news for a new series of family portraits and daughter Charlotte’s christening — were also on hand. Kate wore a standout L.K. Bennet red summer dress.

Sienna Miller stepped out in a white jumpsuit and wedges, and designer Stella McCartney looked summer-ready in a pair of playful leopard pumps.

See what the stars are wearing at Wimbledon by clicking through our gallery.