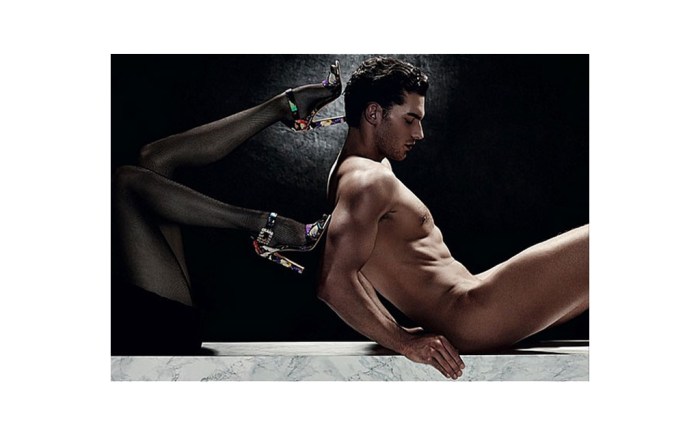 You could argue that Brian Atwood has just given women exactly what they want. The images from his new spring ’15 campaign have been released, and alongside his trademark stilettos, the designer chose to feature model Aurélien Muller sans clothes. That’s right ladies, the man is naked.

Given that Atwood’s favorite hashtag is #thesexisintheheel, it’s really no surprise that he stepped it up a level this season. The designer clearly wanted to get our attention, and that he did. You could say an added bonus is the lack of clothes to distract from the sky-high styles he has produced for this range. Although perhaps the distraction just comes in a slightly different form!

Chicago-born Atwood was the first American designer to be hired by Versace back in 1996. In 2001, Atwood launched his eponymous label, while continuing to consult for the brand, which is also known for its provocative campaign imagery. Most notably featuring a scantily glad Nolan Funk, in their spring ’14 campaign. The Canadian actor and star of “Glee” was shot in tight Versace briefs by famed photographers Mert Alas and Marcus Piggott.

In 2007, Atwood was named Creative Director of Swiss luxury label, Bally, where he remained until 2010. His fall ’10 presentation in Milan was his last for the brand. He is a member of the Council of Fashion Designers of America and has been honored with our Footwear News “Designer of the Year” award in addition to his diffusion line, B Brian Atwood, receiving our “Launch of the Year” in 2011.