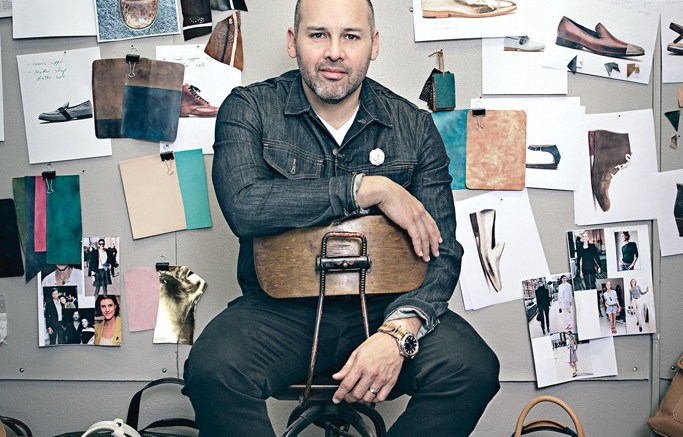 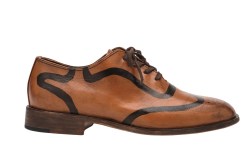 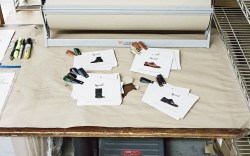 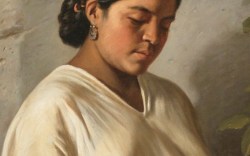 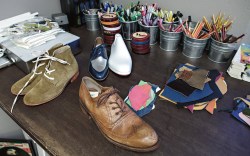 He designed his first shoe exactly 20 years ago, and today, George Esquivel keeps that black-and-white spectator in his design studio to remind him how far he’s come.

Back then, a Mexican cobbler produced the look. Now, Esquivel has his own Los Angeles workshop, where he creates his eponymous collection from start to finish.

And as creative director of Tumi, a position he accepted last year, Esquivel works on the luggage line in the same space. The two collections have informed each other, according to the designer. For example, he has worked to introduce more leather to the luggage pieces.

The 2009 Vogue/CFDA Fashion Fund nominee also recently unveiled a sandal and summer chukka for women as part of the Wear LACMA project, in partnership with the Los Angeles County Museum of Art. The looks were inspired by Felipe Santiago Gutiérrez’s painting “Portrait of a Woman With a Marigold” from 1876, and they are sold through Net-a-porter.com and Thelacmastore.org.

Here, in his own words, Esquivel talks about his creative process.

“For fall, I just wanted to play with color. And I went back to basics.

I was looking at designers and artists, and I thought I needed a season to just play with some classics. It was more about my mood. I wasn’t really inspired by a movement.

And actually, I got tired of seeing so many of the colored soles and shoes that were just so ‘out there.’

The hand-painted wingtip and cap toe are my interpretations of classics, but they’re also very California at the same time — they’re not so structured and perfect. There’s a little bit of edginess to them, but not so much where it’s in your face or aggressive. I’m past that phase now. I like subtle contrast, sometimes a little more than others, but always developing. The painted lines of the wingtip are [a good example of] how I take the classics and reinterpret them.

That style started out for men, and then so many women were requesting it through our made-to-order catalog that I incorporated it into the [fall collection]. Barneys New York ordered the wingtip and is getting a women’s last and a little-softer toe.

Because I have my own shop here, if I have an idea, I can develop it. [When I design], I draw directly on a last. There’s no point for me to sketch. If I want to change a toe shape, I will take a last and literally change the toe shape. Then I’ll sketch on the last how I want the shoe to look.

The shop has become my strength. Aside from making my shoes here, I have a place to do research and development. I have a playground here, which is amazing.”

Bright ideas: “I love color. I don’t own a black pair of shoes, personally. We sell a lot of black shoes, but it’s just not in me.”

Back to basics: “I gravitate toward the classics, but there’s always that twist in materials or the toe shape.”

Staying in tune: “Music is still No. 1. It inspires me. I’m not a music expert, but I’m a big music fan. I like Janelle Monáe (at left), The Killers, Kings of Leon, Aloe Blacc, Alabama Shakes. I appreciate what they do.”