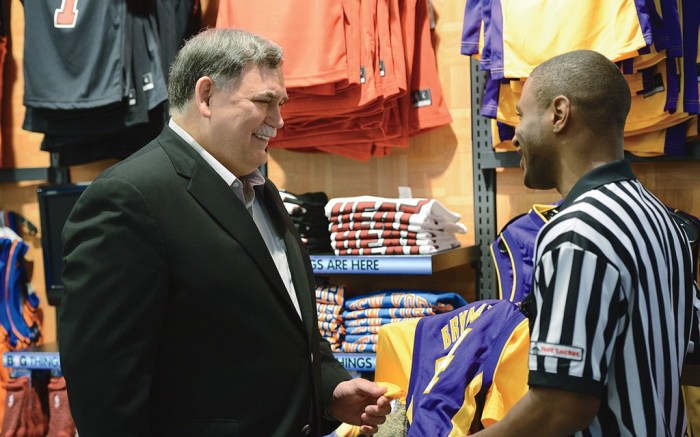 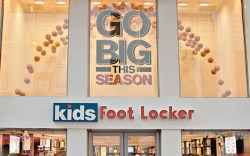 Foot Locker may be turning 40, but Ken Hicks is looking way beyond that number.

“Foot Locker is a company that has done well over the past several years, and because of the great team we have, we’re even better positioned for the future with a number of significant opportunities [for our] brand both in the U.S. and internationally,” the New York-based firm’s chairman and CEO told Footwear News.

Hicks has good reason to be feeling bullish, thanks in part to the red-hot sneaker trend fueling the footwear market.

“Shoes are more than 75 percent of our business. When you think of the Foot Locker brand, our mantra is, ‘It’s Sneaker Central,’” Hicks said. “[Whether in] Europe, Canada, Australia or the U.S., when people think, ‘I need a pair of sneakers,’ they think of Foot Locker first.”

The numbers tell the story of the retailer’s recent success: For the period ended Aug. 2, 2014, the retailer reported net income of $92 million, a marked boost over the $66 million in the same quarter a year earlier. Sales rose 13 percent to $1.64 billion for the second quarter of 2014.

“Foot Locker is doing a lot of positive stuff,” said Matt Powell, an analyst at SportsOneSource. “The only place you could say they have not got it figured out is women’s. They are on the path there, but they have not yet nailed it.”

Notably, women’s was a bright spot for Foot Locker during the second quarter, said Christopher Svezia, an analyst at Susquehanna Financial Group.

The European business, which has been weak for some companies, is also showing considerable growth for Foot Locker. Running and basketball both proved to be highlights for the firm — and the retailer continues to stand out from the pack with exclusive styles from top vendors.

But that’s nothing new — the retailer has always been an athletic trailblazer. When the company opened its first location in September 1974 in the City of Industry, Calif., the 2,800-sq.-ft. store broke new ground as one of the first to offer solely athletic footwear.

The business grew rapidly, and today, the company operates 1,858 Foot Locker stores globally and more than 3,400 doors across all of the company’s banners.

Here, Hicks talks about must-have product, the big opportunity in women’s and his predictions for the next 40 years.

Basketball has been especially strong lately. Do you see the category taking more share going forward?
KH: We have strong basketball and running [programs], and there are new looks and technologies that help both. Some of the basketball shoes now, they’ve gone more low-cut — in some cases, unless you look at the sole, you wouldn’t know whether it was a basketball or running shoe. And that’s made basketball a more universal business. Plus, [you’ve got] great players such as LeBron [James], Kevin Durant, Kobe [Bryant] and [Derrick] Rose, [who is] coming back. That helps basketball. In running, you have great casual looks like Roshe from Nike, ZX from Adidas and Free from Nike. There’s also new technology in running: Boost from Adidas, the new shoes from Asics, and SpeedForm from Under Armour. There are more things happening in performance running that will help grow that business.

What progress have you made in developing the women’s business?
KH: We see some green shoots, [and] we feel good about women’s both in terms of Lady Foot Locker and [its two-year-old] Six:02 [concept]. The customer wants a place where she can shop and buy performance brands in a nice environment, and what we’re providing is both shoes and apparel.

What are you doing to better position Lady Foot Locker?
KH: We have started to step up the remodeled Lady Foot Lockers — or, I should say, reformatted and re-merchandised Lady Foot Lockers — to allow for showing more apparel and for better showing the [merchandising] ideas. We plan to roll out a number of those through the rest of this year. The challenge we have is that we can’t do it in some doors because of size. Some Lady Foot Locker doors are too small and don’t allow us to show the products.

So size is critical?
KH: What we’ve learned is that to be a viable women’s banner, you need to offer a good selection of both footwear and apparel. Those [locations] that don’t allow the showing of apparel probably are not viable long-term. Not that they can’t sell a lot of shoes, but they won’t be as effective without the apparel. So we’ll close the smaller and less-productive stores.

You’ve taken some heat for the slow rollout of Six:02. What is your stance on that?
KH: We’re less than two years old on Six:02, and [that] seems like a long time. But Lululemon didn’t [expand outside] northwestern Canada for four or five years. We want to get it right and understand what the customer wants. I don’t think it’s slow; I think it’s thoughtful, and when we do roll it out, we will have something the customer really wants.

Where do your various store redesign projects stand?
KH: We’ve completed Kids Foot Locker, and by end of year we’ll be about 20 percent through with Foot Locker and approaching 30 percent with Champs. We’re also testing our Footaction remodel prototype.

The kids’ business has been a bright spot. How are you capitalizing on the momentum there?
KH: Children’s was our fastest-growing segment [earlier this year], not just in Kids Foot Locker but also in Foot Locker and in our Champs and Footaction stores. We’ve expanded Kids Foot Locker internationally, and it’s now in Europe and Canada — we’ve been developing that over the past year or so.You’ve rolled out a number of branded partnerships with key vendors — the most recent being Puma Lab last year — and recently opened a brick-and-mortar element for Eastbay.com.

What’s driving those concepts?
KH: We think of [those types of partnerships as a way of] getting to the customer and connecting channels, to make the stores we have more exciting and interesting places to shop. We feel very good about House of Hoops, Nike Fly Zone, the Adidas Collective shops and Puma Lab. They will continue to be an important part of the draw of our stores.

Are there plans to increase the footprint of these branded shops going into 2015?
KH: We have taken a number of stores down [in size] each year since I’ve been here, but last year and next year, our actual square footage will go up. We’re making the stores bigger to handle these formats. They’re very productive: They drive traffic and help the stores be places customers want to go.

There has been much talk about the decline of the mall. Does that worry you?
KH: There’s a misconception out there, and I’ve been saying this for some time: Survey after survey shows that millennials like stores. They go to meet friends and see product. But they also like to shop online, and they like to be connected, so we need to make sure we connect. Putting our channels together is important. The winners of the future are those [retailers] that have stores and online, and that connect them well.

Is that true across the board?
KH: Some of the lesser malls are more challenged. But we have the ability to trade more broadly than many of our competitors. We can trade in an inner city or in a more urban location as well as suburban. We can trade with a customer who may not have all the advantages, with young kids and with men my age because of the breadth of service and assortment we offer. [The new formats also] help us stand out in the more premier malls, and those continue to do well. People still like to get out into an environment — shopping in a store is entertainment. You have to make it a place where they want to go. Retailers that are having difficulty haven’t invested in service, online and product, and therefore they’re suffering. We have had the benefit of making investments.

Which brands are seeing strength in your stores?
KH: The customer will go to those places that offer the products they want, and Nike has a lot of what they want. So Nike is strong, and they are a terrific partner who we work well with and want to grow aggressively with. But we see other vendors as not standing still. Adidas has some new things: some great football boots, a strong American football shoe they’re selling, and the new basketball shoe with Boost technology that I think will be a big win for them. So Adidas is doing well. Also, Under Armour has the new SpeedForm shoes and apparel, and Puma is working very hard to come back.

What is the outlook on the Runners Point acquisition?
KH: We want to make sure we get it right. They had gotten a little broad and wide at the turn, so now we’re focusing it more, with Runner’s Point on technical running and Sidestep on more fashion and trend. We’re pleased with the results. They were accretive in the first few quarters, and we think we will continue to see success from them.

Are you feeling bullish about the next 40 years?
KH: The athletic market will continue to grow and develop and be an exciting place. We’re grateful that the people at Kinney Shoe and F. W. Woolworth came up with the concept for an athletic shoe chain called Foot Locker, and we’re very proud to be part of that and to continue to expand the idea they had. Not many chains have survived in the past 40 years, but we’ve flourished. We’ve been able to do that because of a strong team, strong partners, great customers and never being satisfied. [We’re] continuing to evolve and grow our brand and make it into something that is great for customers, great for us and great for our vendors and shareholders.