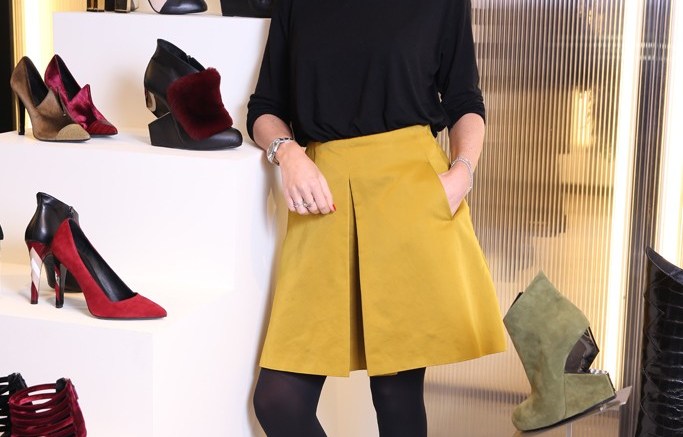 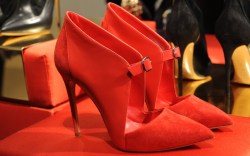 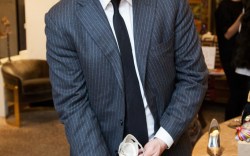 New Moves
“This season, I was influenced by dance,” said up-and-coming Roman designer Charlotta de Luca of her Charline De Luca footwear collection. “Each shoe is named after a performer I love.” For example, The Bey (after Beyoncé) is a thigh-high boot. A more innocent block-heel bootie was deemed the Shirley (after Shirley Temple), while an ultraviolet style with a colorful stiletto heel was called Josephine (after Josephine Baker.) De Luca recently began working with the New York-based PR firm Krupp Group to widen her exposure in North America. The firm also will help arrange a designer collaboration for Fashion Week next season: “I love Rosie Assoulin,” de Luca said. “Her work is so clean and geometric, but also very feminine.”

Get Lucky
For Cesare Casadei, sleek black boots with gold hardware weren’t just punk, they were Daft Punk. “They are one of my most favorite groups,” the designer said at his presentation in Milan during Fashion Week. “I absolutely love ‘Get Lucky’ and was inspired by [the duo’s] style.” His collection also took cues from another masked musical movement: the Venice opera scene of the 1920s. “That’s where these bold lines and rich reds come in,” said his wife, Alessandra, pointing to a high-note vermillion pump.

Birthday Shoes
“For me, this is a celebration of my grandfather, my father and me all together,” said René Caovilla’s third-generational leader, Edoardo Caovilla, at his Milan presentation. And festivities are kicking into overdrive for the family brand’s 80th anniversary, with the designer and COO visiting several Neiman Marcus stores this month — in Beverly Hills, Calif.; Dallas; and Miami — to fete a capsule collection he designed exclusively for the retailer. The offering of updated archival styles (dating from the company’s inception in 1934) will retail from $1,200 to $2,000. “We decided to bring the most beautiful ones back, but reinterpreted with the shapes and colors fit for a modern period,” he said. Separate capsules will be rolled out for Harrods in London and Lane Crawford in Hong Kong. And for Caovilla senior, Edoardo has something up his bespoke sleeve. “I am preparing something for him [in Italy], but it’s a secret,” shared the Milan-based designer. “It’s important in life to celebrate the happy moments. My grandfather started this company at a crazy time, making these [ornate] shoes during the second World War. He wanted my father to be a priest!”