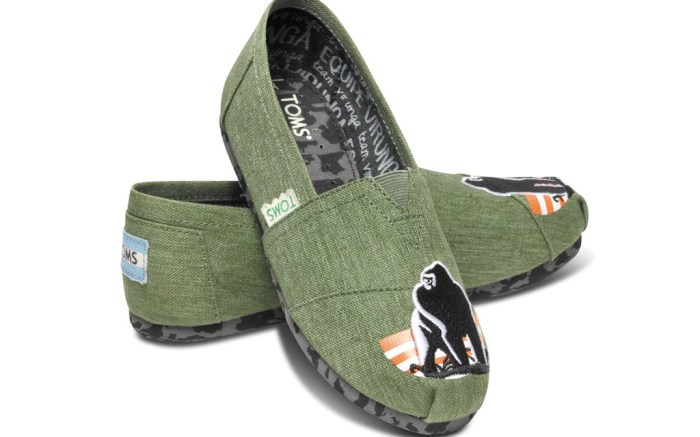 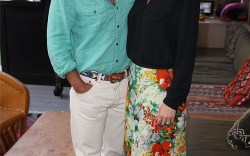 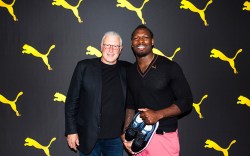 Congo Line
Toms Shoes is getting animal friendly. The brand launched its Animal Initiative on Toms.com Tuesday, thanks to a push from Heather Mycoskie, the wife of company founder Blake Mycoskie. “I have always been extremely passionate about animals. Working for animal rights and conservation has always been a cause close to my heart,” Heather Mycoskie said. Up first, the brand is launching a style to support the mountain gorillas in the Democratic Republic of Congo. “The idea of the initiative stemmed from a trip Blake and I took to Rwanda,” she said. “During our time there, we were able to meet a family of 24 gorillas. We learned about the challenges the gorillas in the nearby Virunga National Park were facing. I knew I wanted to help, and a partnership with the park and Toms seemed to be the perfect fit.” A portion of sales from the line will benefit the Virunga National Park. Prices are $42 to $48 for kids’ shoes, and $64 for men’s and women’s styles. The brand will continue to launch additional partnerships.

Puma’s Power
Puma added some firepower to its endorsement lineup. The brand announced that No. 1 National Football League draft pick Jadeveon Clowney is joining its training team. The new Houston Texan will be included in Puma’s new “Forever Faster” campaign, set to launch later this year. It will be the first in his multiyear agreement. Clowney, who called his deal with the brand a “dream come true” in a release, will join fellow NFL players Jamaal Charles and Cordarrelle Patterson on the Puma roster.