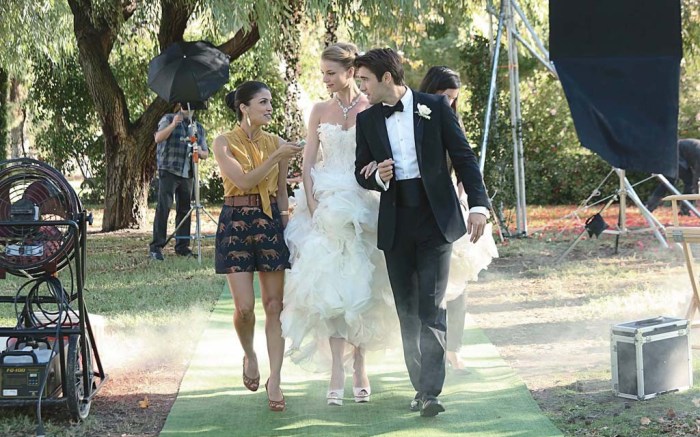 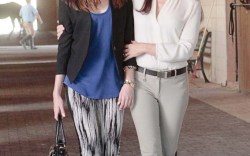 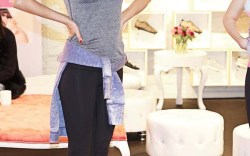 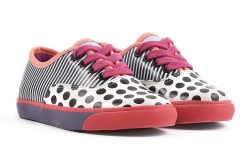 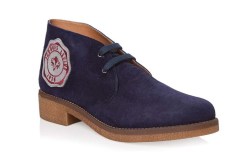 Revenge Factors
What shoes work best for plotting revenge? It’s a mix of high and low brands, according to Jill Ohanneson, costume designer for ABC’s “Revenge.” And with the return of season three, Ohanneson is ready to start showing off fall looks on the characters, who reside in the Hamptons. “I love shoes, I have a fetish,” she said. “I have a size 11-and-a-half foot, so it makes it hard to buy shoes. I live vicariously through my actresses on the show.” Here, Ohanneson spills about brands on set and an upcoming major footwear moment.

What styles are you looking forward to featuring on the show?
“We’re moving into darker colors — more blacks, more grays — and we’re finally moving into boots. [My process is] I find out what the outfit is going to be, but some footwear looks don’t work well on camera — for example, too chunky of a color. Then I ask, ‘What is the most beautiful shoe on the foot?’ For me, it’s a beautiful high heel d’Orsay pump.”

How about your favorite brands?
“We have found what works best for each character: Victoria [Madeleine Stowe] loves Manolo Blahnik, Charlotte [Christa Allen] works really well with Jimmy Choo. Emily [Emily VanCamp] would be happiest in boots, but we have to find that heel that still looks beautiful. She looks great in Manolo, and we have some Christian Louboutin. I also use Charles David and Steve Madden. It’s really such a mix.”

Any scenes where footwear steals the show?
“There is an amazing moment coming up. I can’t talk about it too much because we’re in negotiations with shoe companies to showcase their [brands]. One of the characters talks about lusting after this style. It’s an opportunity to showcase a great, interesting shoe.”

Walking on Air
“I’ve got so many shoes, I couldn’t even count them,” said Miranda Kerr, who admitted she’s always cleaning out her closet. “I give three pairs away for every new pair I buy. My friends certainly appreciate it.” Now, the supermodel has a new style in her collection from Reebok. Kerr is currently the spokesperson for the brand’s Skyscape shoe, a lightweight lingerie-inspired design. Martina Jahrbacher, Reebok’s VP of global brand marketing, led a presentation last week for the shoe, which is made almost entirely of foam and has pillowy, cloud-like soles. “There’s no men’s line yet,” Jahrbacher said, “but we wanted to maximize and make a sexier version of comfort for women. Miranda is so natural and our favorite choice.” A yoga workout was part of the event, too. “I love doing yoga and pilates at home,” said Kerr. “I try to dance every day. I do plank poses. Every bit helps.” It sounds like her 3-year-old son, Flynn, is a fan of Reebok, too. “He had these Reebok pumps he ran around in. They’re my favorite shoes of his, but he lost them,” Kerr said. “You reminded me, I’ve got to get another pair.”

Girl Power
There’s no rest for Sophia Webster. After her London Fashion Week presentation and a showing in Paris, the Brit arrived stateside last week for a three-city tour of Saks Fifth Avenue locations in New York, Atlanta and St. Louis. After the whirlwind travel, Webster and her husband and business partner, Bobby Stockley, planned a weekend away in Mexico. But the designer isn’t sure she can completely unplug. “I need to design a pre-collection,” said Webster, who’s also focusing on her new kids’ line.

A Kid Again
Sam Calvanio is feeling sentimental about crafts and kayaking. The president of Jacques Levine created a fall ’14 women’s chukka style featuring a patch reminiscent of a merit badge — an homage to Calvanio’s boyhood days at Camp Greylock in Becket, Mass. “Everyone who goes to summer sleep-away camp has a nostalgia for it,” said the executive. “I always remember getting those felt badges, whether it was a fire-starter award or a sailing award. [While creating the shoe], I spent hours on Etsy looking at different badge designs, and then I came up with our own.” He also told Spy the 1936 embroidered on the patch refers to Jacques Levine’s founding year. The chukka, in suede, comes in multiple hues and retails for $220.

Brew Baby Brew
Keen is getting into the beer business. The Portland, Ore.-based outdoor brand worked with neighborhood brewery Widmer Brothers Brewing this month to create Full Fender Brown Ale, a small-batch brew. It was produced to raise awareness for the Portland Bicycle Transportation Alliance, and 300 bottles were distributed at an event at Keen’s headquarters. Craving a draft? A few kegs remain and will be served at events throughout the summer.