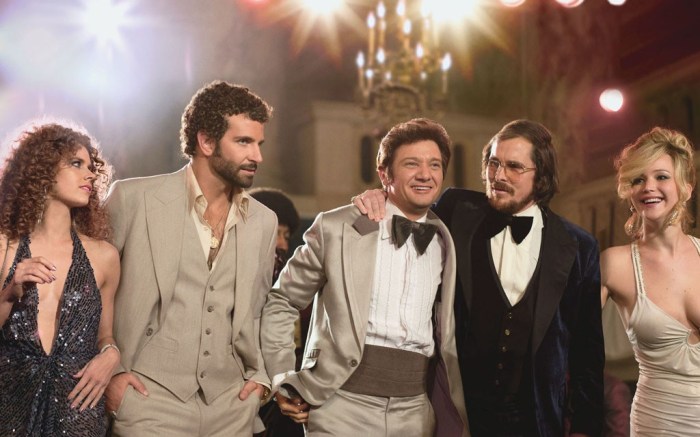 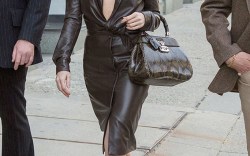 What role did the costumes play in the movie?
“There is such a range of characters in the film. The one thing they have in common is they’re trying to reinvent themselves. They’re dressing as people they’re aspiring to be. We have people from the vibrant world of New Jersey — it’s a working-class world but full of bravado. The Manhattan scene is more worldly and sophisticated. And there is the world of Long Island and sprawling suburbs, too.”

How did you dress Amy Adams’ character?
“With Amy’s character it was important that she came across as a sophisticated and fashion-forward dresser. The brands we were drawn to were Charles Jourdan, classic Gucci, and we mixed in some vintage with contemporary to get the right freshness and flavor. With her evening dresses we collaborated with Badgley Mischka, which provided some classic disco-inspired and strappy stilettos.”

Any other footwear designers featured in the film?
“One surprising thing was that we were drawn to Manolo Blahnik for Amy. You don’t usually associate him with the 1970s, but when we were researching what the fashion-forward women were wearing then, we came across his name again and again. Manolo created some ivory suede stilettos for the opening sequence in the movie and they have just the right amount of toe cleavage to make them super-sassy.”

What about looks for the men?
“For Christian Bale’s character, we wanted to project a very worldly man who had an appreciation for the finer things in life. He wears Salvatore Ferragamo loafers and Allen Edmonds heritage shoes and lots of rich leathery tones like butterscotch and chocolate. Bradley Cooper’s character represents the everyman. He wears polyester suits and garish ties and gets enchanted by the world of Amy and Christian’s characters. He wore some bold Florsheim shoes that were very fashionable then and had a higher heel and chunkier sole, which represents what his character thought of as being the fashion-forward choice of the period.”

What was your favorite shoe moment in the film?
“The Charles Jourdan style. [Director] David O. Russell is completely obsessed with women’s shoes and he kept a close eye on all the shoe choices and he fell in love with the vintage Jourdans. He dedicated a whole shot in the movie to them. There is a closeup of the shoe and the camera pans up Amy’s leg as she gets out of a car in these beautiful vintage black-and-gold Charles Jourdan strappy shoes. They get some serious screen time.”