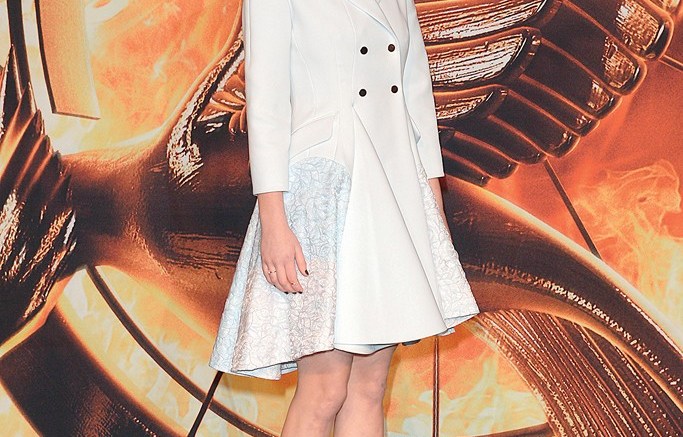 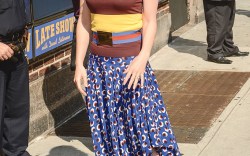 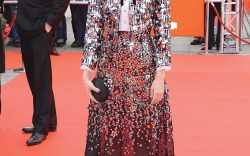 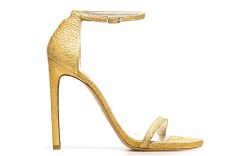 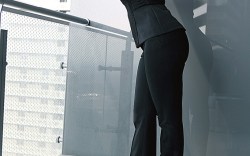 Nudist Colony
Call it the hardest working shoe in showbiz. In the past 12 months, the Stuart Weitzman “Nudist” has clocked more than 80 red carpet appearances and paparazzi shots on more than 60 celebrities. According to a host of Hollywood’s top stylists, for whom the brand provided a “closet” of sizes and colorways to suit every occasion, the bare-bones ankle-strap stiletto is a no-brainer.

“It was as if our prayers to the shoe gods were answered when the Nudist came out,” Jill Lincoln, style director of Rachel Zoe Studio, told Spy. “We made a custom order with [celebrity PR company] Sho + Co just in time for award season.” Clients spanning Sofia Vergara “who practically sleeps in 7-inch stilettos,” Jennifer Lawrence, Kiernan Shipka, Gabrielle Union and Jennifer Garner all wore the single-sole under Team Zoe’s style eye. “After years of platforms monopolizing the red carpet, it was a welcome arrival. It’s our go-to shoe when we don’t want to take focus from the outfit,” she added.

Though the brand declined to say how many pairs it has sold, The Nudist, priced from $398 to $625, is now offered in 16 different hues and materials ranging from goose-bump nappa to pyrite nocturn lamé and suede. But the neutral option has proven popular for its elongating effect. “It doesn’t take away from the outfit, and in the nude colors, it makes the leg look long and naked,” said star stylist Illaria Urbinati, who has chosen the style for Shailene Woodley, Nina Dobrev and Lizzy Caplan. “It’s such a clean shoe, very ’90s minimalist, which I love. Usually, I’m either looking for something to add edge, like a cool Sophia Webster. Or I go the opposite way and [pick] a style that almost disappears — like the Nudist.”

The style’s steep 4.5-inch pitch is a departure from Weitzman’s more moderate heel heights. But the designer knew he had a hit on his hands when it launched in spring ’13. He cited Diane Kruger as one of the first famous faces to wear the style. Then Lawrence’s premiere outing was in Berlin last fall for “The Hunger Games: Catching Fire.” And further validation came in May, when 10 women wore it at the Cannes Film Festival. So what’s the key to success? “Sexy, simple, fit,” said Weitzman.

Up and Away
Tina Aldatz is at it again. The founder of Foot Petals has three new projects up her sleeve. She is back in business with best friend and business partner Margie Floris with their new company Savvy Traveler LLC, which focuses on travel products for one-time use. “Margie and I have traveled together for over 15 years, we are like George Clooney in that movie ‘Up in the Air,’” she quipped. “We found ourselves constantly getting sick, frustrated by lost bags and disgusted by walking through security in bare feet!” And with the business underway, Aldatz also has a book coming for fall, “From Stilettos to the Stock Exchange,” about her experience of launching Foot Petals. “It was actually therapeutic, going back to memories I had forgotten about and also laughing at so many mistakes and missteps along the way,” she said of the book set to soft launch during Hispanic Heritage Month in September. So what funny stories did Aldatz feature? “Let’s just say what happens in Vegas doesn’t stay in Vegas. Such as my sister dancing on stage with Rod Stewart, getting thrown out of a nightclub with buyers,” she said. “And sad, but true, having to fire my mom.” To top it off, Aldatz is also the co-producer of “Frontera,” a film about the immigration debate slated for a September release.

’90s Nostalgia
Karen Gallo loves the Beastie Boys. The hip-hop group even inspired a few styles in her resort collection, which took cue from both ’90s hip-hop and Adidas styles. And the decade isn’t fizzling for Gallo anytime soon. “My next collection will be inspired by my favorite girl in the world, Aaliyah,” she said. The designer’s plushy fabric pool slides will come in handy in August though — she hopes to travel to Jamaica for her birthday (and for pre-fall inspiration). “It’ll be hot there, but I’m South American, so hot is not [too] hot,” she said. Maybe she’ll find inspiration for a men’s collection there, which she hinted at tackling next.

Spotted…
Rupert Sanderson on the feet of Antonio Berardi. The designer collaborated on the footwear for Berardi’s resort ’15 collection, as illustrated in FN’s pick for Instagram Moment of the Week. See more at Footwearnews.com.