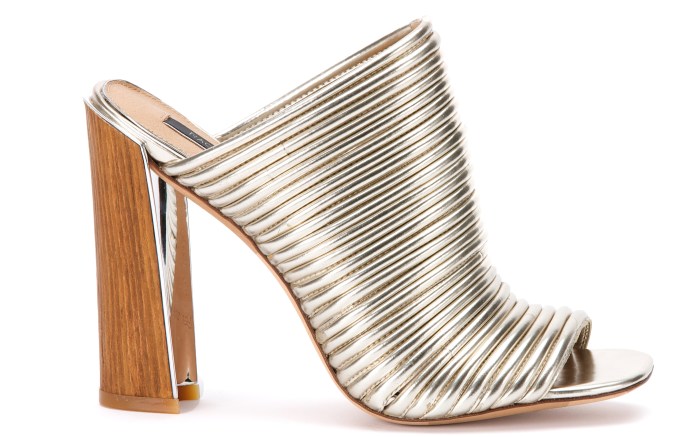 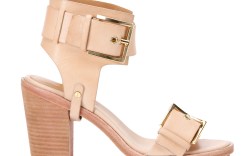 Country Couture
Both cowboy boots and Jimmy Choo heels are made for walking on the set of “Nashville.” The ABC show, in its third season, features a wide range of footwear brands, according to costume designer Susie DeSanto. “The whole style aesthetic of our show is really Southern sophistication,” she said. “We work with a lot of beautiful designer brands.” But since the show is centered on performances, DeSanto is also focused on shoes fit for the stage. “When we feature big arena tours, we really try to bust out all of the sparkle,” she said. Here, the costumer takes Spy behind-the-scenes on a star-studded set.

What are some of your favorite labels to feature?
“The shoes on the show, especially for Connie [Britton] and Hayden [Panettiere], [could come] from the floor at Bergdorf Goodman. The girls are always getting dressed up for their shows, so we use a lot of high-end, great footwear. For our Country Music Award episode, Connie wears Rene Caovilla, and Hayden is in a rhinestone-studded pair by Valentino. We also just shot a Christmas episode and featured red satin Louboutins and a silver pair of Jimmy Choos. We also regularly [showcase] cowboy boots. We have Jimmy Choo motorcycle boots, Old Gringo, Rag & Bone and Isabel Marant.”

Where do you go to find great men’s looks?
“There is a local place in Nashville, Peter Nappi, that creates quintessential handmade shoes from Italy. Deacon, [played by Charles Esten], wears vintage cowboy boots and some nice Frye boots. Luke, [played by Will Chase], is often spotted in Lucchese.”

How are you experimenting for season three?
“Hayden’s character, [Juliette Barnes], has gone through the biggest evolution. Last year, we had a lot of performance looks — Saint Laurent boots, Louboutins — and she was testing the boundaries as an artist. She’s grown as a star, and we follow that path with her, toward pop and not so much country. She’s a size 5, so it’s always a challenge. My shoppers in Los Angeles contact Barneys and Neiman Marcus and they tell them, ‘Any size 5 that comes in, let’s get it first.’”

Can you share a fashion secret about “Nashville?”
“There is a lot of footwear on T.V. that doesn’t get seen, so many shots are done as close-ups. But our actors still have on great shoes and jewelry.”

Odds in Your Favor
Is Supra volunteering as a Tribute? On the heels of the newest “Hunger Games” trailer release, the brand has a sneaker collaboration up its sleeve. The West Coast label gave Spy an exclusive first look at three high-top styles inspired by the latest “Hunger Games” film, “Mockingjay: Part 1.” Naturally, the shoes take inspiration from the costumes on set. “We turned our creative loose on this one. It was really a collaborative effort with their team and ours to come up with the styles,” said Scott Bailey, CEO of Supra’s parent company, One Distribution. The Capitol Couture Skytop IV was designed with an eye on the upper classes of dystopian country Panem. The District 13 Vaider sneaker has the grit of the rebels’ uniform, with the Mockingjay symbol and District 13 logo on the tongue. The special-edition third style is set to be unveiled Black Friday.

Hollywood Kicks
Adam Drawas, Hollywood and fashion publicist who has worked with Preen and Hanley Mellon, among others, is making the foray into footwear. Drawas is debuting his first line of fashion-focused sneakers, launching online in time for the holidays and in specialty stores next spring. The unisex collection takes its cue from his travels, with rich textures and prints incorporated for a bit of global flair. “My personal travel inspired me: raffia from a recent trip to Tulum, blue textiles from Greece and a London-inspired graphic black-and-white cheetah print,” he said. So why shoes? Drawas said Korean fashion brand Crucial came to him with the idea for the project, and the two decided to partner on the launch. Drawas also gave some hints about the fall ’15 collection, which is inspired by the 1970s. “Think David Bowie,” said Drawas. Expect glitter, laminated lace, PVC and a whole lot of sass.