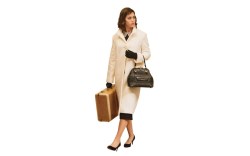 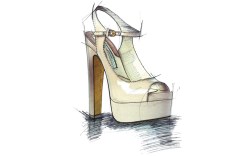 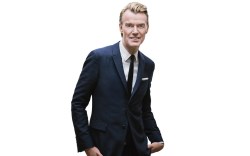 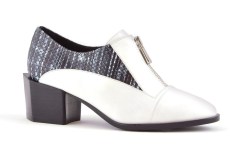 Selling Sex
“Masters of Sex” is mastering footwear looks for season two, where costume designer Ane Crabtree showcases period footwear for the show set in the early 1960s. “What I want is for the viewer to identify with characters so much that they don’t feel the separation between past or present, there is something so classic about their [style],” said Crabtree. Here, the costumer shares shoe secrets and how the show has updated — and outdated — her wardrobe.

Any challenges with shoe selection?
“We love to be absolutely realistic head to toe, with late ’50s to early ’60s period attire. Our favorite footwear looks were always the most delicate. And when shooting in Los Angeles, it was 90 degrees and shoes would disintegrate. Actors wore their shoes for 12 to 18 hours.”

What footwear styles can we expect for season two?
“High heels and platforms didn’t exist back then. We turned to shoes that resemble period shoes, but they are brand spanking new. For our principals, we use modern-day shoes — Calvin Klein does a really clean pump with not too high of a heel. We also use Nine West and some Italian brands as well. For the gents, Michael [Sheen] has been wearing a very classic wingtip by Brooks Brothers. We also search on Zappos.com for comfort shoes because those look sort of period. This season, we are looking for a bit of a lower kitten heel for the early 1960s.”

Has your style been taking a trip back in time, then?
“Being a costume designer, you can be selfless and do whatever is needed for the actors and directors. Then there are moments of extreme selfishness, where I sketch something on a napkin at breakfast that I want for Lizzy [Caplan]. I will take that to the tailor, and he says, ‘Madam, you should have that as well.’”

Guest Lists
Here comes the bride. Louise and Vince Camuto traveled to Montecito, Calif., to watch longtime business partner Jessica Simpson marry Eric Johnson. Insiders told Spy that several bridesmaids donned custom Jessica Simpson looks, while Simpson herself paired her Carolina Herrera gown with custom Brian Atwood pumps. “I was excited to work with Jessica for her wedding day and create something to reflect her bubbly personality,” Atwood said. “She wanted a fabulous platform sandal that had great support; she wanted to be able to dance all night long in them.” Louise Camuto’s adventures don’t stop there. “Every summer, I look forward to taking our 10-year-old son to visit my family in Sweden where I grew up,” she said. “It’s a beautiful country and nice to experience it with him. It’s important that he knows his heritage, both Italian and Swedish.” When she’s back at home, Camuto has some sweeter plans: “We take frequent trips to the beach and [New York Italian restaurant] Sant Ambroeus for ice cream.”

Nature’s Nurture
The dog days of summer are calling Ken Downing. Neiman Marcus’ SVP and fashion director intends to take a break from his jet-setting lifestyle before the busy fashion-week diary kicks off in September. “My summer is mini-breaks at my country house on a lake. I live on an airplane, [so spending] time with my dog and the tranquility of the country is my perfect bliss,” Downing said. He also plans to flex his green thumb at his recently acquired acreage near Dallas, which he hopes to transform into a sculpture garden. Meanwhile, Karen Katz, Neiman Marcus Group president and CEO, is using her vacation time to get in touch with nature. The company leader is packing her hiking boots and heading with her husband Alan to the mountains. “We’re leaving Dallas’ 100-degree heat behind and heading to the wildflower capital of the world: Crested Butte, Colo.,” Katz said. “We’ll be high up in the mountains at elevations over 9,000 feet where it’ll be a cool 70 degrees, making for some very long and challenging hikes with friends.”

Urban Edge
Heather Williams is back. Though the founder of H Williams took a break for financial reasons back in fall 2011, the Brooklyn-based designer has relaunched her label for the fall and spring — and it’s got a whole new look, including chunky slip-ons and mules. “Before, my line was strictly dress,” she said. “[Now], in doing more casual product, the edginess can be really masculine, so I wanted to put some femininity in the product.” Williams spent the past few years consulting for brands such as DKNY, where she eventually partnered with a factory to relaunch with a more contemporary price point (styles range from $279 to $595). But don’t mistake the collection’s urban vibe for unrefined: The designer has three friends who have requested her shoes for their wedding days. “People want [something different],” she said. “They want something they could wear again.”

Spotted…
Bill Clinton alongside Michael Greenberg and the Skechers team. The former President was on hand to give the keynote address at the brand’s annual Global Conference to about 1,500 team members. “Within America, all over the world, people who believe in win-win scenarios, who really are trying to build networks of creative cooperation, are making good things happen,” Clinton said to the crowd.