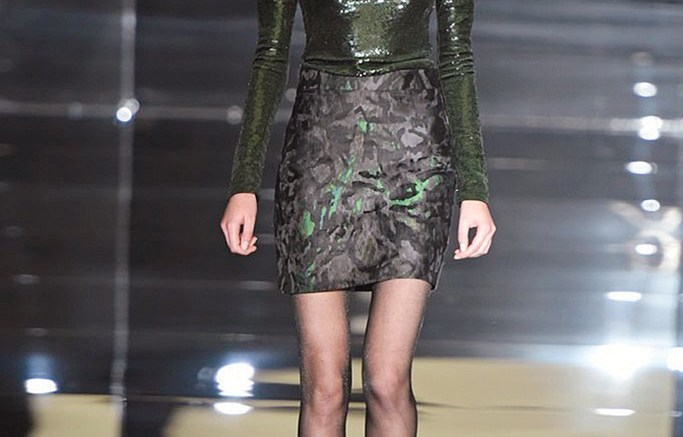 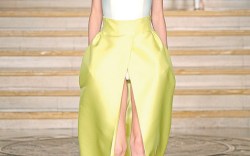 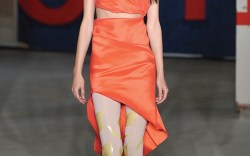 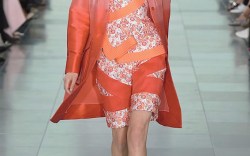 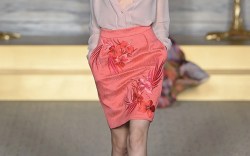 London Eye
Spy ranks the top moments from the runways.

Best sneaker cameos:
• Alice Temperley debuted her capsule collection of trainers. “I love flat shoes, not just for work, but also to give evening looks a relaxed attitude,” said Temperley, who was wearing them at her show. A departure from her signature dressed-up approach, the low-top Italian-made laceup came in seven different prints and was paired with every look.
• With everyone from Cara Delevingne in the front row to her fellow top models on the runway sporting them, retro runners were Burberry’s beat this season. The sneakers (plus a selection of comfort-sole sports sandals) were offered in a number of vivid hues, with contrasting soles and footbeds.

The multitasker:
Simone Rocha is known for her avant-garde approach to footwear classics. This season, she tackled the gamine pointed flat by trimming it in the fluffiest of fur. Not only did they look quite charming, they would also, we imagine, double as a floor duster.

Return of the platform:
It’s been a while since anything but single soles had relevance on the runway. But that will all change for spring ’15 if Tom Ford has his way. At his show, models strutted out in chunky glam-rock styles, elevated with thick heels and ankle straps. Do we sense a shoe sea change ahead?

Loudest call of the wild:
Sophia Webster’s graffiti-clad presentation was entitled “Jungle Is Massive.” With swaying models in full rave regalia and tropicana-themed footwear, the title certainly did ring true.

Kirkwood’s quote of the week:
“Of course I can’t pick a favorite, they are all so different.”
— Nicholas Kirkwood on which of his multiple collaborations (patterned sandals at Peter Pilotto, gladiator flats at Erdem, asymmetrical styles at Roksanda Ilincic and painted hosiery boots at Thomas Tait) he thought turned out best this season.

Paris Bound
Bon Voyage, New York. Hello, Paris. Alejandro Ingelmo will soon enjoy the Parisian lifestyle, as he jets off for the CFDA/Vogue Fashion Fund’s “Americans in Paris” initiative this weekend. There, he will show his spring collection, and he’ll travel with his favorite men’s style, the runner. “It has an easy look and lift, and it makes me a couple inches taller,” joked Ingelmo. Plus, he always makes a stop at restaurant Le Castiglione, for the “best burger,” he said. The designer will be in good company, too. George Esquivel, Misha Nonoo, Marc Alary and Maxwell Osborne of Public School, among others, also have a ticket to the program.

Riccardo’s Back
Third time’s a charm. Back for their third and final collaboration, Nike and Givenchy’s Riccardo Tisci are teaming up on a line of limited-edition sneakers. The four Air Force 1 styles — set to hit stores on Oct. 16 — range in price from $230 to $340, and include a low-, mid- and high-top style, as well as a women’s sneaker-boot. Just two days after images were released, singer Ciara posted a picture of herself wearing the high-tops on Instagram, with the caption “#SupaChill.”

Island Inspiration
Angela Scott is still in vacation mode — so much so that a recent trip to the Caribbean inspired her spring ’15 collection. The mix includes The Office of Angela Scott’s signature monk-strap versions in pinks and yellows, as well as newly introduced looks like heeled cut-out boots and platform-sole brogues — a style her husband isn’t a fan of. “He calls them piggy hooves,” quipped Scott.

Going to Heaven
“It’s a total celebration of shoes,” said Cesare Casadei of Harrods’ brand-new Shoe Heaven space, officially unveiled at a packed London Fashion Week party last week. Manolo Blahnik, Nicholas Kirkwood, Charlotte Olympia Dellal, Sandra Choi, Aquazzura’s Edgardo Osorio and Rupert Sanderson were among the other names on hand. “London needed this, and where better than Harrods to introduce true shoe luxury?” Osorio said. “It feels super-elegant and classic. I love how they’ve retained the art deco elements,” said Dellal. About the black single-sole pointed pumps she wore to offset her animal print, she explained, “I didn’t want to take away from my styles displayed here. Sometimes it’s all about the dress. You’re not going to believe this, but I said to my husband the other day ‘I have no shoes to wear!’”