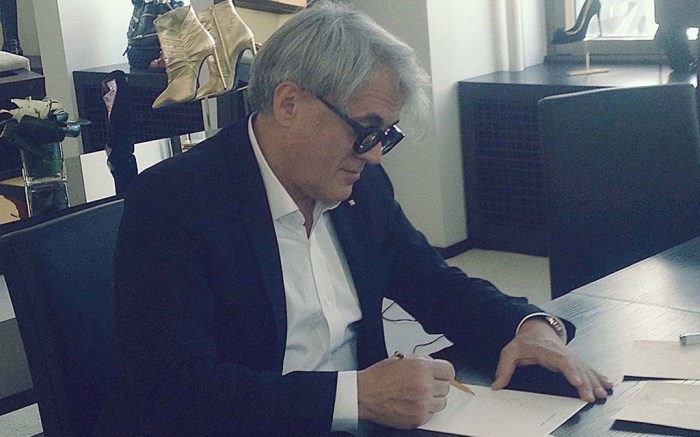 Toasting 20
What’s the best way to celebrate two decades in business? For Giuseppe Zanotti, the milestone is just an excuse to create more shoes. “People keep telling me I should do a movie or a book,” the designer told Spy during his New York visit last week. “For me, it’s about the shoes.” Zanotti will bow a capsule collection in June of six bejeweled sandals (based on best-selling styles). And last Thursday, top Bergdorf Goodman consumers got the opportunity to shop exclusive looks with the designer. Later, he greeted more fans during a personal appearance. Then, it was off to Tokyo, where Zanotti will celebrate the anniversary in one of his brand’s hottest markets. “I have about eight more trips than usual this year,” the designer said, admitting that jet lag can sometimes catch up with him.

Spotted …
Drew Barrymore donning Dana Davis. Barrymore recently walked the CinemaCon red carpet in the designer’s Heidi style, a peep-toe heel in suede with a python print, to top off her sunshine-yellow ensemble. “[Drew] loved them so much she asked to buy them in every color,” said Davis. “I know our shoes are comfortable, but a pregnant woman dying for [them] because they don’t hurt her feet — we have a winner.”