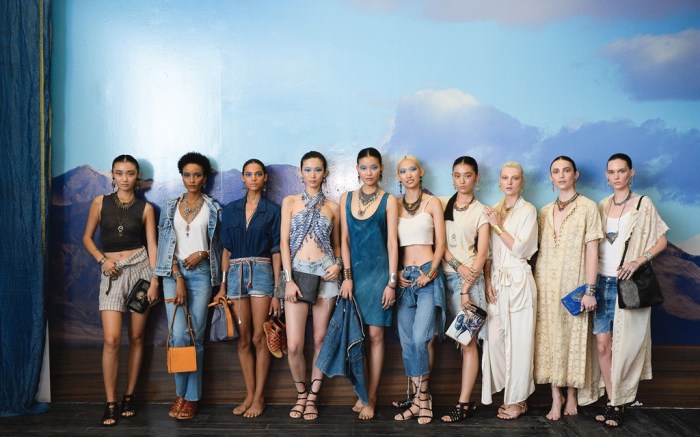 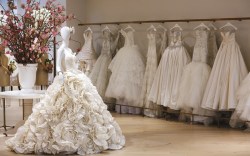 Double Trouble
The Dannijo sisters are off on a Mongolian roadtrip. At least, that was the inspiration for their spring ’15 presentation, where models donned the pair’s newly minted footwear collection. “We were set on accessorizing our girl from head to toe, and it’s exciting to have shoes in the show,” said designer Jodie Snyder of the spring debut of more than 20 styles. And to stick with the theme of travel, the designers showcased flat sandals and gladiator-inspired looks in neutrals and metallics. “My sister, [Danielle Snyder], is wearing the heel version of them. I’m not a sample size, so I’m still waiting for my pair,” Jodie Snyder said. The duo also planned to hit the New York Fashion Week circuit for several shows, including Timo Weiland. “We definitely love to support our friends,” Jodie Snyder said. Afterward, she will gear up for another new addition. “I’m due in February, so everything I’m into is kids,” she said, hinting that the line could expand to children’s shoes, too.

Wedding Bells
Ron White is tying the knot again. This time, it’s with iconic bridal retailer Kleinfeld, which recently bowed a mega-boutique in Hudson’s Bay Co.’s flagship in downtown Toronto. The designer, who operates a string of eponymous stores in Canada in addition to a namesake line, will be offering his first-ever bridal collection exclusively for Kleinfeld in January. The collaboration came about after Bonnie Brooks, vice chairman of Hudson’s Bay, suggested the designer create bridal looks for Kleinfeld, the Manhattan location of which is the setting of hit reality TV series “Say Yes to the Dress.” White said comfort was a key factor in the line, having watched brides kick off their uncomfortable shoes after their ceremonies and then run around barefoot. Included in the collection, priced from $395 to more than $500, are pumps, halters and strappy sandals in luxe materials such as crushed crystals on suede. “It’s fun to envision what a princess wants to wear,” White said.

Tube Talk
Kristin Cavallari is back on the small screen. The Chinese Laundry collaborator signed on earlier this year as a cohost on E!’s “The Fabulist,” which focuses on fashion, beauty and lifestyle topics. And while the guest list is always rotating, Cavallari is hoping for one special name to appear on set. “I would die if Kate Moss came on, she is my ultimate style icon,” Cavallari said. On screen, she’s managed to give her brand partners some play, too. “I love wearing tons of different heels. It’s a great time to show off my favorites,” she said. As for her spring ’15 collection, the designer focused on earth colors and yellows. “I’m including more muted tones than is typical in spring, which I love,” she added. While Cavallari, now a mother of two, is busier than ever, she still finds time for sketching. “Luckily my hours are flexible, so I can work on my shoe designs during nap time or after [my kids] go to sleep,” she said.