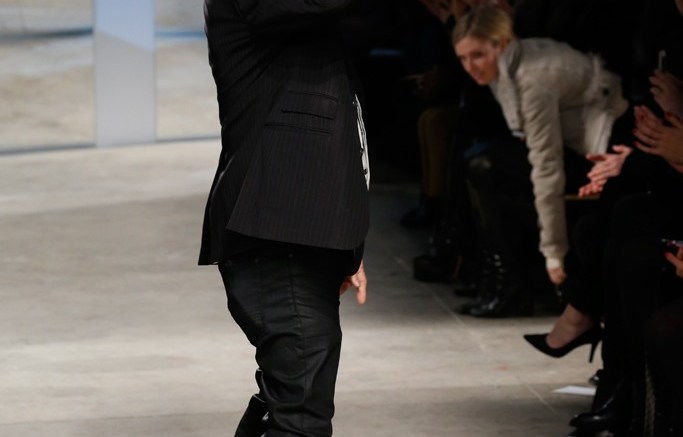 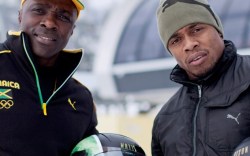 Reality Ignites
Kenneth Cole’s fall Western-themed collection at New York Fashion Week went from black-and-white to deep blood reds — think trendy platforms, riding boots and lug soles with hardware finishes. Before the show, guests watched a humorous short film called “What’s Real,” starring the designer’s friends Alan Cumming and Rachel Dratch as competitive Twitter frenemies. The dynamic duo walked the runway during the show’s finale, and then Spy caught up with Cole backstage to talk shop. “Everybody’s always talking about how we over-glamorize our individual aspirations,” he said. “So we wanted to take it to a newer place. Alan’s a good friend. Anytime there’s a chance to say something provocative, Alan’s the first in line to call.”

Brand Conscious
Giuliana Rancic can certainly judge shoes, but can she design them? The co-host of “E! Fashion Police” joined HSN for a second season with a collection featuring brightly colored dresses, pants and suede jackets, but no footwear — yet. “I’ve talked to the company about it. I’m such a shoe girl, so I’d love to design them,” she said. “We’re definitely going to expand. It’s just a matter of what will come first, footwear or handbags.” As for the rest of the line, Rancic said she likes to keep the looks simple. “The ponte knit material is doing so well because it allows women to move comfortably,” she said. “I’ve found people starting their own lines tend to want [to design] high fashion, but what women really want are functional pieces that they can wear over and over again.”

Medal Moments
It’s bobsled time. At the Olympics this weekend, the two-man competition will kick off with a familiar face: 46-year-old Winston Watts of Jamaica, who represented the island nation in the sport in 1994, 1998 and 2002. Taking a page from countryman Usain Bolt, Watts and his teammate, Marvin Dixon, will wear Puma gear for the competition and on the podium. “Do I like the cold? What do you think? I wish I could put on everything I packed all at once. I just try to imagine being in a warmer place and focus on the competition,” Watts said in a statement. “It’s exciting to be here and I just want to do my country proud with a great performance.”

Fashion Forward
Danny Schwartz has a full plate during New York Fashion Week. The CEO’s firm, Schwartz & Benjamin, works with Diane von Furstenberg, Kate Spade New York, Derek Lam and Rebecca Minkoff. “My favorite part is when the runway shoes are delivered perfectly and everyone is happy with them,” he said. So where do Schwartz and his team go to celebrate? “We like to take our clients to places where we wouldn’t usually go, such as The Leopard at des Artistes on the Upper West Side,” he said. “And a new favorite is The Writing Room on the Upper East Side.”