FN Spy: Coachella Hits… Feit for the Right to Party 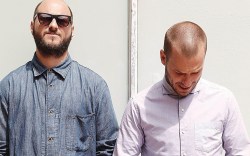 Theresa Mullen, VP of marketing, Dolce Vita
Best musical moment: “At one point, we had Lucas Walters, Mr. JPatt (The Knocks), Erik Tonnesen (Holy Ghost), and Prince Terrence (Hussle Club) performing some great music, and everyone was dancing in and out of the pool.”
Favorite footwear: “Booties for days, lace-up sandals, woven booties, embellished gladiators, mirrored metallic heels and sport slides were putting in some serious work all weekend long.”
Party central: “Our house was located on a private estate in Indio, right near the festival grounds. We had monogrammed robes for all our party guests to throw on when they were lounging post-swim and they said things like ‘Robe Life,’ ‘Not Tonight,’ ‘Total Kook,’ just to call out a few. Those ended up being really fun when people got to dancing.”

Mary Slevin, marketing director, Lacoste
Celeb spotting: “Kendall Jenner sported a decorative nose ring and danced with friends in the [water] misters to cool down from the heat. After two days at the festival, Chord Overstreet said he was taking it easy on his third day in town. He preferred to chill in a cabana by the pool drinking coconut water with his posse.”
Party central: “Guests were invited to make a splash in the pool, enjoy a cocktail, treat themselves to beauty touch-ups or dance in the desert sun. Partygoers participated in a Lacoste footwear DIY station.”

FEIT CLUB
Feit founders Josh and Tull Price have plenty to fête. The brothers behind the indie sneaker and boot brand have just kicked off a month-long shop-in-shop at Assembly New York. “Cool girls with great style of all ages have dragged me into his store,” said Josh Price. It was a logical next step for the two, who have been testing the wholesale waters after a direct-to-consumer run, plus a flagship in their native Sydney. Indeed, like-minded trendsetters descended on the Lower East Side boutique Wednesday to peruse handmade kicks. “Having a broader accessibility has been great for [fans] to come in and touch, feel, learn about the product,” said Tull Price, who also heads Rag & Bone’s footwear division and founded Royal Elastics. Afterward, Feit followers decamped to the The Fat Radish for a celebratory dinner, where Tull’s wife, Natasha, who is also involved in the business, was happy to kick up her feet. “The women were going crazy for the leather slippers,” she said.