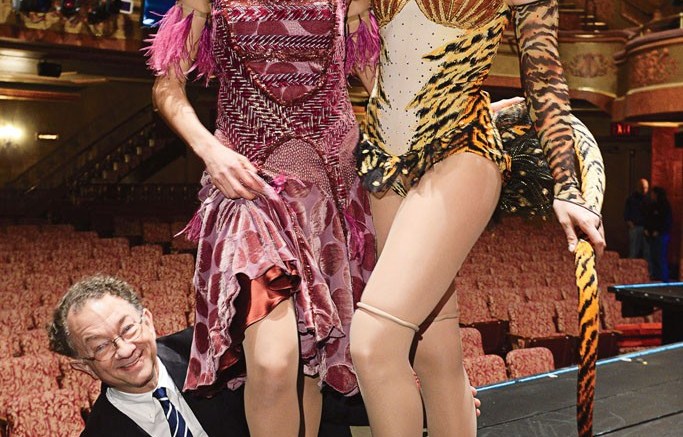 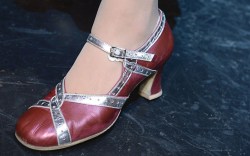 For costume designer William Ivey Long, no detail goes unnoticed. “They call it my ‘eagle Ivey eye,’” said the six-time Tony Award winner, who gamely draped himself across the “Bullets Over Broadway” stage last Monday to show how he critiques his work at the same angle audiences will view it. “I’m making changes all the time.”

Curtain call may be approaching for the Woody Allen musical, opening at the St. James Theater on April 10, but Long took a break to invite Spy backstage for a sneak peek at his latest creations.

In total, the designer needed more than 200 pairs of shoes for the show’s 30 characters, who range from high-brow thespians to a low-brow mistress and her gaggle of gansters. Among his favorite styles are the Mary Jane and T-strap shoes seen on ensemble members Amanda Kloots Larsen and Beth Johnson Nicely. “T.O. Dey custom made them for each dancer. The brand is the best,” he said of the label, founded in 1926 and still made in Manhattan. “These shoes are so soft. Your toe has to touch, otherwise you’re not confident. Let’s just say it: They are stubby-toed. But I learned to love it because it gives the performer what they need,” he said of the split-sole elk leather court with a 2.5-inch heel. “That’s the highest you should go.”

Long based the shoes on the 1920s and early ’30s, taking into account the script’s 1929 setting. For Bullets’ tap-dance showdown, the costume designer turned to shoemaker Menkes for more bespoke spectator styles.

While shoes on display are eye-catching, they never distract from the elaborate costumes, which include silk swing dresses and the opening-number’s leotard bustiers complete with tiger tails. “It’s all about the line of the leg,” Long said. “My favorite shoes often are nude like Chanel did, with just a little contrast cap on the toe. It creates an illusion of length.”

Director and choreographer Susan Stroman, Long’s partner on the show, as well as about 20 other productions, said she is always impressed with the costumer’s foot work. “Not only do [the shoes] look beautiful, but the [performers are] able to dance and point their toes,” she said.

For Long, whose Broadway credits have included “The Producers,” “Hairspray” and “Big Fish,” pre-show jitters remain quite real. “Do I still get nervous? Sure. It’s live theater and the world premiere. [‘Bullets’] was a movie, but that doesn’t guarantee it will succeed in this medium,” he said. “We’ve got a couple more weeks of intense work.”