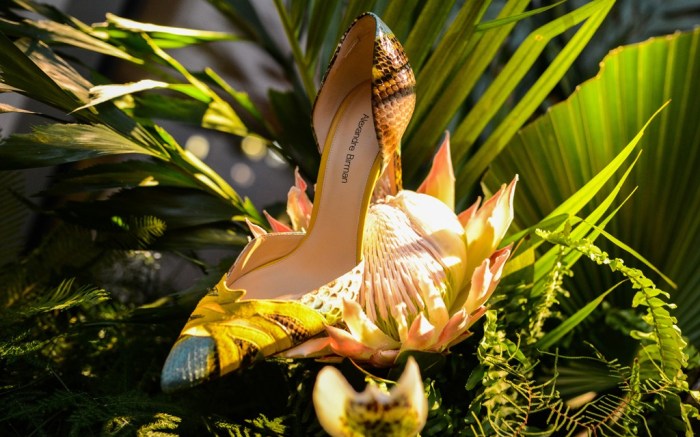 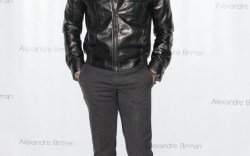 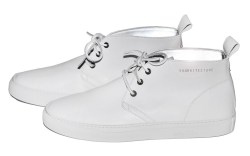 Flower Power
Shoes were literally blossoming for Alexandre Birman. The designer hosted his fall preview at the Museum of Modern Art on Thursday, where he showcased looks inspired by a 1910 painting by Henri Rousseau. “‘The Dream’ is a masterpiece I admire immensely,” Birman told Footwear News. “It depicts a woman in a lush, green forest surrounded by lotus flowers, animals and foliage. I incorporated those themes into my designs — tribal motifs, tattoo patterns and laser-cut techniques — while creating unique, beautiful shoes for everyday women.” With Rousseau’s painting as the backdrop for the party, Birman fans and friends gathered to celebrate the launch. On hand were blogger Bryan Boy, author Nelson George and co-hosts photographer Charlotte Kidd, art expert Laura de Gunzburg (creative director of L’ArcoBaleno Ambra Medda), urban designer Lily Kwong and jewelry designer Zani Gugelmann. Talk about an in crowd.

Construction Zone
Del Toro also kicked off the first night of Fashion Week with a party at The Standard Shop. The soiree celebrated the brand’s limited-edition sneaker collab with Miami-based artist Daniel Arsham, also known as Snarkitecture. The Del Toro by Snarkitecture inverted chukka is an all-white shoe (or so it appears at first glance) lined with 3M reflective material — that material also served as the night’s backdrop. Guests were kept entertained snapping photos of their silhouettes, which not even an Instagram filter could correct. “The backdrop and shoes are made from the same material as construction gloves,” said Del Toro founder Matthew Chevallard. “They appear all-white, but if you look closer, the material is around the edges of the shoe.”

But as the Del Toro event came to a close, another bash upstairs was just getting into full swing. Editors and guests filled the Boom Boom Room for the Vince IPO party. Among the VIP crowd was Brown Shoe Co. Chairman and CEO Diane Sullivan, Sam Edelman and reality TV star Jill Zarin, who cozied up to husband Bobby Zarin as the evening went on.

On Target
She may be the star of “Orange Is the New Black,” but Taylor Schilling was among the well-heeled fashionistas seeing red at the private shopping event to celebrate the Peter Pilotto for Target collection. There was no preferential treatment for those accustomed to sitting in the front, with bold-face names like Alexa Chung being made to wait in an enormous line at Gotham Hall in New York on Thursday, all to get their hands on a piece of the latest offering. The retail frenzy, which could be described as the fashion world equivalent of Black Friday, saw editors, models and media folk snapping up the collection’s digital-print sweatshirts, swimwear and playful sunglasses. Actress Diane Kruger donned one of the designer’s creations for the event, paired with ankle-strap black high heels. The Target collection, which features two pairs of colorful patterned slip-ons and officially hit stores on Feb. 9, was designed to brighten up the month.

Iron Man
Talk about walking the walk — or, really, running, rappelling, biking and canoeing the walk. Mark Rouse, owner of Runners High ’n Tri in Arlington Heights, Ill., will be in the field for next week’s inaugural Maya Mountain Adventure Race in Belize. The 220-mile race through the jungle will include not just running but mountain biking, canoeing and rappelling, among other disciplines. (Participants are encouraged to bring their own snake-bite kit, knife and food). Rouse is predicting 80 hours for his team (which includes two of his store’s customers) and said he is feeling as prepared, thanks to training that included running down and back up the Grand Canyon on New Year’s Eve. “It’s been a great experience, but it’s very intimidating,” Rouse said.