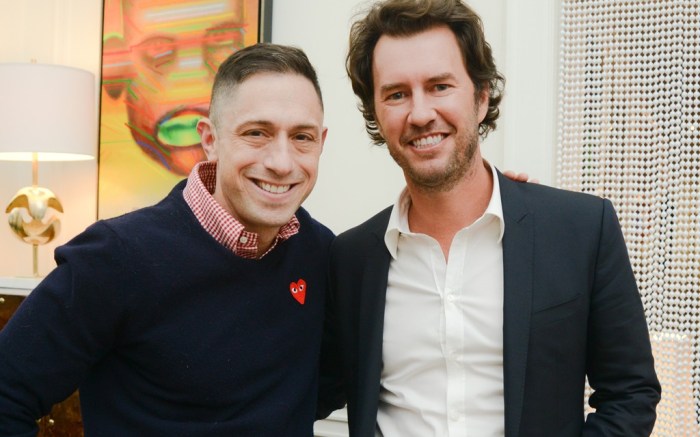 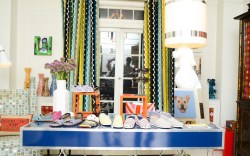 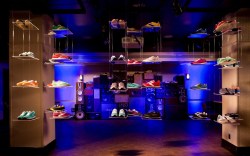 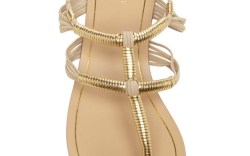 Right at Home
Toms founder Blake Mycoskie and Jonathan Adler collaborated last year on eyewear. Now they’re working together again on a companion footwear line for spring. Surprisingly, though, they had never met in person until Wednesday night, when the two hosted a dinner at Adler’s Greenwich Village home, which he shares with his partner, Simon Doonan, author and creative ambassador of Barneys New York.

“Jonathan is friends with lots of folks on the Toms team, plus I have a lot of pieces of his in my house,” Mycoskie confessed, referring to Adler’s famous homewares. “We were both laughing about how it takes us having a party at his house for us to actually get together.”

For Adler, the collaboration was a long time coming. “I don’t know how it actually happened, but I’ve loved Toms and have always rocked them. When the idea even came up, my chakras started to tingle with excitement,” the designer gushed.

Party guests mingled in Adler-Doonan’s colorfully patterned home while perusing the collection, set on display in a room near the entrance. The flats and sandals come in women’s sizes, priced at $59. Eyewear is unisex and retails for $160 to $170.

“My designs help reflect the Toms vibe, which is bright, colorful and functional, plus it gives back. What’s not to j’adore?” Adler quipped. Additionally, the sunglasses feature Adler’s bold stripes for what he calls a “rad, optimistic view of the world.”

Brooks Back in Time
The athletic heritage brand kicked off its 100th anniversary Tuesday night in New York’s Ace Hotel by unveiling the Heritage Footwear Collection. The men’s and women’s line comes in two-tone colorways and textures, and, according to the collection’s creative director, Shane Downey, pays homage to the Olympics, Big Ten athletics and 1970s stars of track and field. The collection will begin retailing at Nordstrom and Anthropologie in March, with a nationwide rollout in sneaker boutiques to follow. But Downey also has something else to look forward to next month: March Madness. “I’m excited about the way the tournament plays out every year. There’s always a fall Cinderella story, and I definitely like Syracuse in this year’s bracket. Wichita State has a nice little chance even as a smaller conference team,” he said. “Plus, the Super Bowl you get one day and March Madness you get three weeks, so it’s fun to celebrate for a longer period of time.”

An Ideeli World
Styling a single outfit can be challenging enough, but Marie Ivanoff-Smith has her work cut out for her as Ideeli.com’s senior director of editorial merchandise. As part of the e-tailer’s trend-spotting team, she creates dozens of looks each season. “We start from the runway and we translate it to our customer,” she told Spy at a soirée celebrating spring ’14 and Ideeli’s recent revamp. “My favorite part is when I finally see the things on the rack. It comes from something like a [mood board] we show to our buyers and say, ‘Go get this for us.’ And they come back with [apparel, footwear and accessories that fit the theme], and it’s amazing.” So what’s on Ivanoff-Smith’s personal shoe wish list for spring? “The Gucci sandal,” she said, pointing out a glam gold flat. “It’s very well done and it goes with everything.”