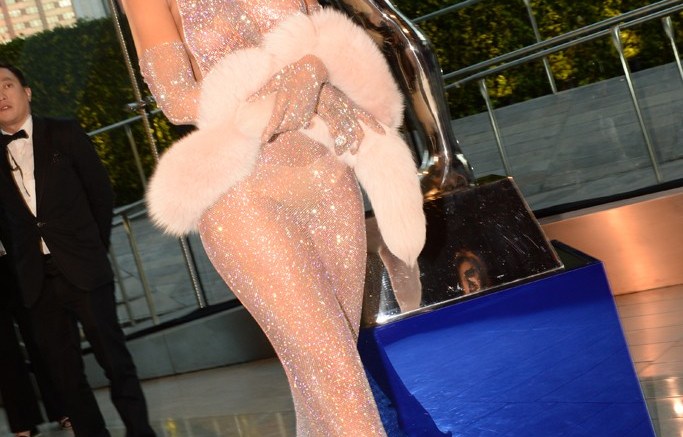 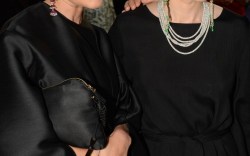 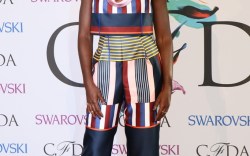 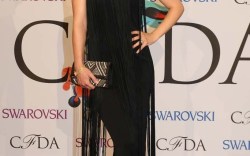 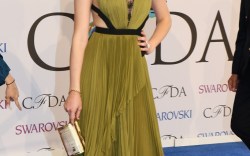 Monday’s event, hosted at Lincoln Center’s Alice Tully Hall in New York, welcomed top designer and celebrity names, including Emmy Rossum, who arrived with J. Mendel designer Giles Mendel. She donned a single-sole look by Manolo Blahnik, in collaboration with J. Mendel. “Because the dress was so intense, we kept the shoes simple,” she said, gushing over the style.

“We had a fitting, we met and we fell in love,” she added of Mendel. But the actress seemed to have another fan in the room — minutes later she chatted with Kenneth Cole, who asked the star to take a selfie with him.

Cole arrived on the arm of Saks Fifth Avenue President Marigay McKee, who also chose a crystalized look by Blahnik for the evening. “They are my “Sex & the City” pumps. I fell in love and I had to have them,” McKee said.

When asked about any after-party plans, Cole quipped, “My life is an after party.”

The designer added of McKee’s Saks transformation, “I’m a Marigay fan. She has a formidable task at hand.”

Lupita Nyong’o, a presenter for the event, created quite the stir during her entrance. She stood out in a fuchsia style by Sophia Webster. And while the starlet has not yet met the designer, she told insiders that a special custom style is coming her way from Webster.

But height wasn’t important for presenter Greta Gerwig, who walked the carpet with Zac Posen. What might you find Gerwig wearing in her daily routine? “I wear men’s penny loafers by Sebago. That’s my thing,” she said.

Neiman Marcus’ fashion director and SVP of stores, Ken Downing, chose his favorite pair of Chelsea boots for the evening. “It’s the right trend,” he said. So what styles would he chose for the women in the room? “Sexy, but still comfortable. I’m seeing a lot of gorgeous women in the single-sole stiletto or super-strappy style, which always puts a smile on my face.”

Stuart Weitzman arrived with a special guest, Olivia Wilde, who donned his Nudist sandals. Also in the style was actress Sophia Bush.

Mary-Kate Olsen sported Christian Louboutin’s Nymphette black satin lace-up sandal while hitting the red carpet with her other half, Ashley Olsen. The duo also walked away with Accessories Designer of the Year for their fashion label, The Row.

Also representing Louboutin was Man Repeller blogger Leandra Medine, who opted for an “awesome, painted python” style. “They are the best,” she said.

Casadei also had a moment. Actress Jamie King shone in a white strappy look by the designer, Blake Lively, who was escorted by Michael Kors, wore a pink suede pair, while Rachel Zoe showed off a black platform heel. When first asked if she was wearing her own design, Zoe said, “Yes, I’m wearing a pump. No sorry, these are Casadei. I alternate.”

Ever the Aquazurra fan, Olivia Palermo wowed in a feathered stiletto sandal by the designer.