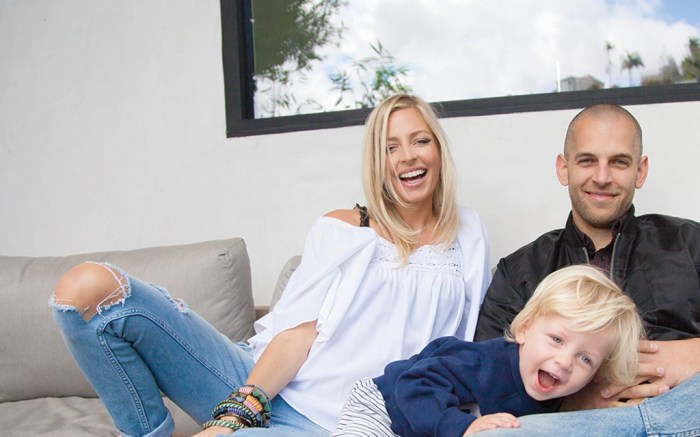 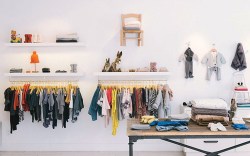 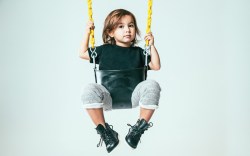 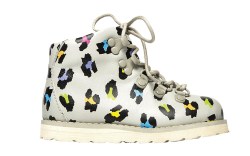 Entrepreneurial tastemakers Ashleigh Dempster and Matt George never planned to venture into children’s shoes — that is, until their son, Jasper, started needing them. “It was natural for us because Matt’s been in the industry forever and I am a shoe fanatic,” said Dempster, who recently gave birth to their second son, Julian. Now, the Los Angeles-based couple is launching Akid, a unisex line of handcrafted boots, high-tops and moccasins priced from $50 to $95 and sold exclusively through their online boutique, Akidbrand.com. “With many brands, children’s footwear is often an afterthought,” said George, who is known in sneakerhead circles for his streetwear emporiums Goodfoot, Nomad and Stüssy in Toronto and Vancouver, British Columbia, plus past collaborations with Adidas and a consulting gig for Kanye West. “[Brands] just take their best-selling silhouette and reduce the size without actually thinking of kids’ feet. We saw a gap in the marketplace.” Details such as super-soft leathers (allowing for sock-free wear) and toddler-friendly zippers give Akid a practicality that matches its fashionable punch. A sense of community is also paramount. “The whole idea is to have a real family feel to it,” said Dempster. Here, the stylish duo reveals a few of their favorite things.

Where I go for retail therapy: “We love [children’s store] Advice From a Caterpillar in Toronto. It’s the whole feeling when you go in there — everything is carefully curated.” — A.D.

Best thing about California: “L.A. is very kid-friendly. Most places have lots of space, both indoors and out. Gracias Madre is a new vegan Mexican restaurant that just opened on Melrose. They have a huge patio, plus the food is healthy and delicious.” — A.D.

Our go-to muses: “From shoe names to the models, it’s all children we know. Anytime we get samples in, our friends bring them over to try them on. The kids give us feedback and we go from there.” — M.G.

Most addictive sites: “I’m obsessed with Style.com. I like to see what’s happening, mainly in the men’s arena. I recently went to the Rick Owens show in Paris, which I liked a lot.” — M.G.

On my nightstand: “We read [children’s style magazine] Milk on a regular basis. It’s a staple in our house.” — A.D.