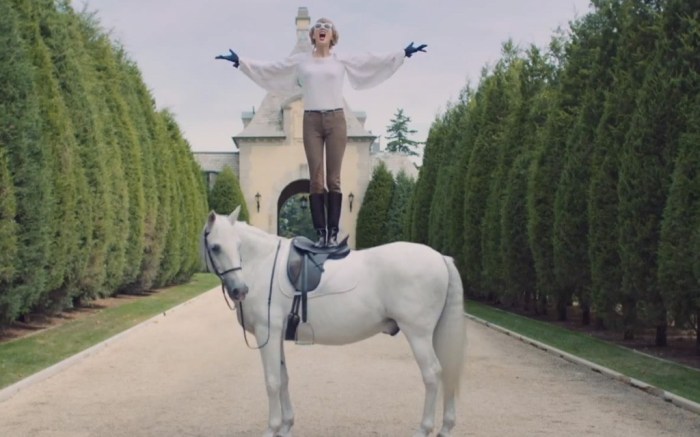 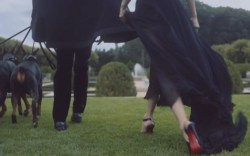 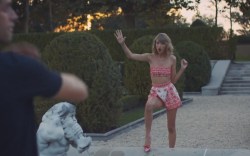 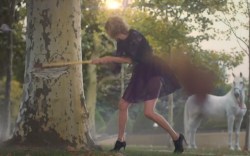 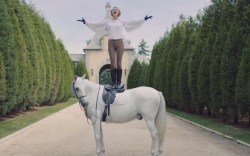 There have been more column inches — and Internet searches — devoted to Taylor Swift’s new “Blank Space” video than FN can count. While her decade-spanning wardrobe has hypnotized most, her footwear collection also deserves some closer inspection.

Directed by Joseph Khan, the clip opens with Swift in several lacy, sequined and flowing gowns, followed by the singer balancing a trio of dobermans while in black Louboutins.

The next shoe close-up features Swift seated beside a fireplace wearing Ralph Lauren’s leopard-print platforms, then perched on a fountain in a pair of Miu Miu kitten heels circa fall ’14.

In between destroying her love interest’s vintage ride before destroying him, the 24-year-old can be seen stomping around in Bionda Castana’s Karlie boots and standing on the back of a horse in riding boots for full effect.

Don’t write off Swift’s high-end heel obsession just yet. In August, the blonde’s summer single “Shake It Off” made waves just as much for its dance style as its footwear fascination.

So, is Swift a bona fide shoe lover or just well-styled? Tweet @FootwearNews with your vote.