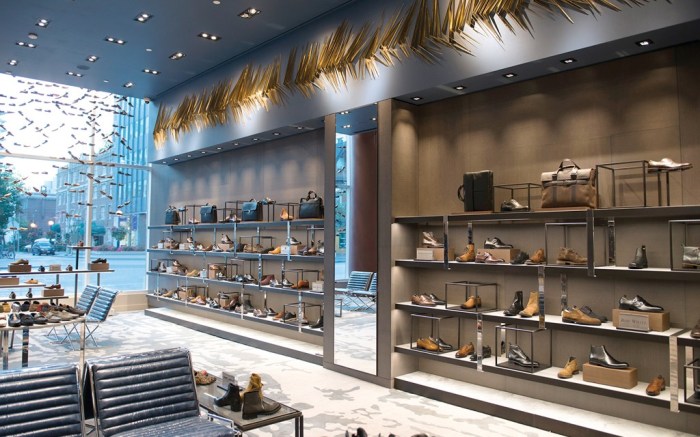 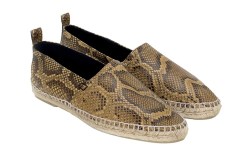 The dramatic transformation of the men’s market continues.

During the past few months alone, retailers from North America to Asia have unveiled ambitious new projects, with increased square footage and a widened assortment of brands.

In Toronto, Holt Renfrew Men opened its 16,500-sq.-ft. store and shoe hall in October, serving as an expansion from the retailer’s pre-existing Bloor Street flagship (which will retain its men’s assortment). Similarly in Hong Kong, On Pedder will launch a 1,500-sq.-ft. men’s store on Nov. 3.

Labels, meanwhile, are upping their emphasis on bolder styles and more unusual shapes.

“The male consumer is very open to newness,” said Emmanuel de Bayser, co-owner of The Corner Berlin. “More and more, we’re seeing them following trendsfaster than before. They want to know when [products] are in so they can buy them before they’re sold out.”

The more-daring footwear trends were present at the spring ’15 shows, where designers presented forward styles across the spectrum, from dress to casual.

To that end, such forward collections have caused retailers to revamp their men’s departments, as male customers are increasingly taking note of the season’s top trends.

“Information via social and traditional media — like Instagram, style blogs or magazines — has greatly influenced the male shopper,” said Bruce Pask, men’s fashion director for Bergdorf Goodman, which remodeled its men’s store in New York last year. “He is confident in making his choices, and he’s educated about the market and what he specifically wants for himself.”

As a result, the category is in a state of growth. According to figures from The NPD Group, the U.S. men’s footwear market spiked 8 percent over the past two years, doubling the growth rate of women’s shoes for the same period. More broadly, overall sales for men’s accessories grew 9 percent to $13.6 billion this past year.

“The men’s market is actually adapting to the consumer much better than the women’s market,” said Marshal Cohen, chief industry analyst at NPD.

Retail Race
Retailers on an international scale are increasing their selection of men’s footwear with expanded offerings and new, stand-alone stores.

Holt Renfrew Men’s new two-level shop, part of a $300 million investment by the retailer, includes a 2,000-sq.-ft. shoe hall. While featured brands include the usual mix such as Prada, Brunello Cucinelli and Lanvin, the larger space also makes way for introductions from Grenson, Buscemi and Magnanni.

“Our menswear continues to perform strongly, with continued solid gains year over year,” said Andrew Lepp, Holt Renfrew’s director of menswear. “As part of our five-year growth plan, we’ll continue to update our existing and new stores with a unique tailored experience, and our approach to our men’s areas will reflect this.”

In Hong Kong, On Pedder’s new men’s spot — located in the basement floor of The Landmark, a popular luxury shopping complex — will feature more than 50 high-end footwear labels including Christian Louboutin, Jimmy Choo and Giuseppe Zanotti, as well as contemporary styles from Common Projects and MSGM.

“The core of On Pedder men’s is strongly represented by [our] footwear categories,” said Peter Harris, president of Pedder Group. “The buying teams have not defined their customer by price or brand, but by lifestyle. We want to offer footwear and accessories choices that are contemporary, purposeful and beautiful.”

Beyond the big players, a new breed of retailers have found success by specializing in the most exclusive designs.

For instance, luxury e-tailer Mrporter.com, which refreshes its selection of stock every week, hosts a growing number of hard-to-find men’s labels and styles, such as Wooyoungmi and Adieu. The online format also allows the shop to stay nimble and capitalize on hot releases. For example, it was one of the few retailers to sell the limited-edition Nike x Riccardo Tisci collaboration looks this year.

“There used to be clearly defined buying periods, whereas now we are always in market looking for new product,” said Sam Lobban, senior buyer at Mrporter.com. “Customers are willing to spend more on shoes that will last longer, which shows how the male consumer is becoming more discerning.”

Hot Categories
Growth in men’s has largely been influenced by designers’ experimentation in footwear categories other than their signatures.

Case in point: sneakers. A range of athletic and luxury brands have participated in creating their own takes on the shoe.

“In the past, we saw brands focusing on formal styles, whereas now we see a big increase in their offering of other categories,” said Stephanie Moor, the men’s buyer at Level Shoe District. “The explosion of the sneaker trend this season has brought huge opportunity in men’s, from luxury through to lifestyle brands.”

Retailers said high-end sneakers have climbed their way to the No. 1 category.

“The sneaker business has been a growing category for Bergdorf Goodman,” Pask said. “While the classic dress-shoe market is certainly vibrant and strong, many brands are looking to enter the casual market.”

The sneaker craze has been so explosive that even women’s designers have tapped into the market. For spring ’15, for example, Pedro Garcia introduced a small collection of men’s suede low-tops, brogues and slip-ons. Additionally, up-and-coming women’s designer Karen Gallo introduced men’s sneakers, embodying a more luxe take with embossed leathers in subtle paisley prints.

“When I was working as a stylist, most of my clients were always men,” Gallo said. “I learned what was missing in many of these guys’ closets: a simple sneaker that goes with anything.”

Outside of the sneaker realm, newer men’s brands are carving a niche in other categories as well, which has helped the market grow at a steady pace.

Louis Leeman, known for its strong sneaker collection, has increasingly pushed more youthful takes on the traditional silhouettes, including the driving moc and penny loafer. Loewe has also done unexpected touches on classic styles, such as clunky laceups with graphic color blocking. New men’s label Opera d’Arte launched an entire collection focused on sandals, a bold move given the seasonal difficulty of the shoe.

Keeping It Classic
Though many designers and retailers are getting bold, not everyone is deviating from standards.

With more exciting designs on the rise, retailers realize the importance of balancing the market by also including expected staples on their roster. That includes monk straps, laceups and oxfords.

Steven Taffel, owner and buyer at Leffot in New York, carries a lineup of brands including Church’s, Alden and Quoddy. Though he hasn’t put an emphasis on the more daring styles from these labels, he has noticed subtle updates beginning to filter into their designs. “The effect on classic brands is evident in various ways, such as color soles, laces and the use of nontraditional materials,” Taffel said.

Even the more daring retailers, from Level Shoe District to The Corner Berlin, are still placing importance on simpler dress looks as well — but with a slight twist.

“Despite the male customer being loyal to the brands and styles they like, they are much more daring and trend-focused,” said Moor. “Even our most classic customer is experimenting with new shapes and color.”

Three to Watch: Men on the Rise

Raf Simons
His high-profile collaborations with artist Sterling Ruby and Adidas — where he put his own spins on the signature Stan Smith style — aside, the designer has found success with his own namesake label, where he specializes in retro runner styles and unusual
sneaker shapes.

Kris Van Assche
Ever since taking over the helm as Dior Homme’s creative director, Kris Van Assche has elevated the classic men’s brand with more daring footwear styles (such as stapled leather laceups for spring ’15). His own line also focuses on sneakers finished with multi-lacing and luxe croc leathers.

J.W. Anderson
Spring ’15 was J.W. Anderson’s first season as Loewe’s creative director, and the Spanish brand has introduced more-forward footwear for men — such as chunky laceups and d’Orsay flats — as a result. His namesake runway show also played with chunky ballet flats.

In partnership with Footwear Unlimited