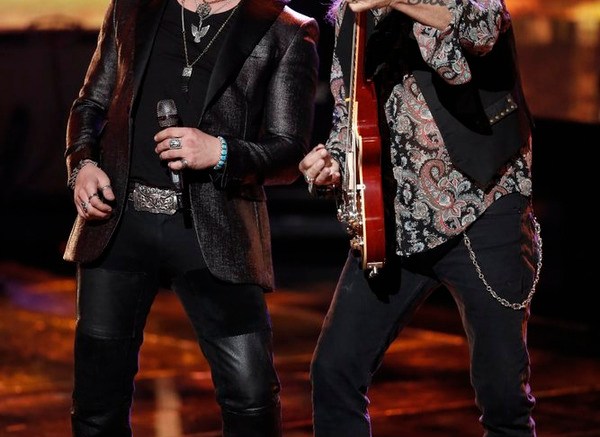 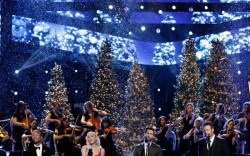 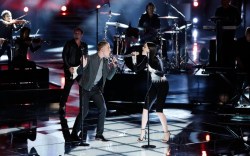 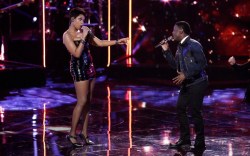 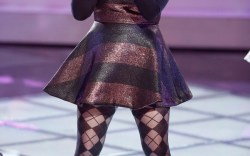 Boyd was a member of Blake Shelton’s team and earned his coach his fourth win on the series. He beat out three contestants — Matt McAndrew, Damien Lawson and Chris Jamison — all from judge Adam Levine’s team.

The seventh season finale of the talent show was among the most star-studded yet with appearances by Meghan Trainor, Jessie J, Lynrd Skynyrd, Ed Sheeran, Jennifer Hudson, Bruno Mars and the judges: Shelton, Levin, Gwen Stefani and Pharrell Williams. Whew, say that three times fast.

Boyd got the chance to perform with legendary band Lynrd Skynyrd during the show, and together they pulled off the country-rock look, complete with cowboy boots and leather jackets.

Hudson stunned in a tight leather mini-dress and opted for sky-high pumps while singing with finalist Lawson.

Jessie J also dueted with finalist Jamison. For her performance, she donned what looked like an up-scale biker short and a heeled sandal.

Not to be outdone, Trainor’s argyle tights were more eye-catching than her lug-soled booties during her performance of “Lips Are Movin.”

But the biggest surprise of the night might’ve been singer Bruno Mars, who made waves for what he wore on his head, not his feet. He took the stage with rollers in his hair for “Uptown Funk.”

The final “Voice” episodes were a bit of an experiment for the NBC series, which has yet to propel a winner to the same level of success seen with some other talent shows, namely “American Idol.” Contestants performed three songs during their final performance Monday night, one of which was a new single written just for them. The show, while is still an important traffic driver at NBC, has looked to spice up its format this year by introducing the new songs, adding new judges Williams and Stefani, and orchestrating that A-list finale.

But perhaps all the star power around him — not to mention his unique tough-country look — will make Boyd the breakthrough.