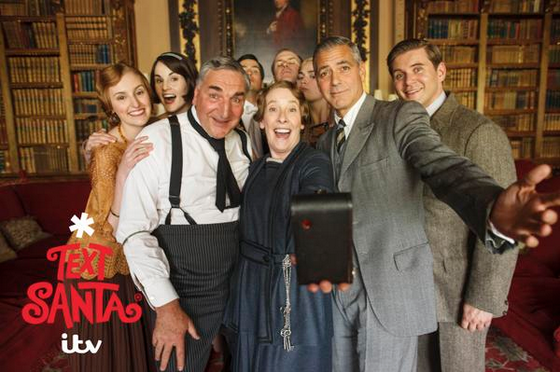 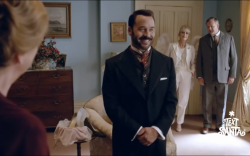 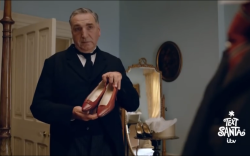 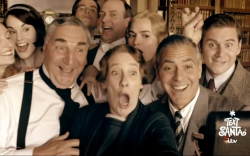 George Clooney is spending Christmas with the Crawleys.

The actor’s much-buzzed-about guest appearance in a “Downton Abbey” sketch for ITV’s Text Santa charity has finally been revealed. And he’s every bit as stylish and debonaire as you’d expect.

In a comic play on “It’s a Wonderful Life,” Hugh Bonneville’s Lord Grantham has lost the family fortune and, in a moment of George Bailey-esque despondence, wishes he had never been born. An angel, played by Joanna Lumley of “Absolutely Fabulous,” arrives to give him a glimpse into that alternate reality.

Cue Clooney, who plays George Oceans Gravity (aka Lord Hollywood), the abbey’s new earl and Lady Grantham’s hunky new leading man. Impeccably turned out in a classic three-piece suit and oxfords, the smooth-talking Clooney charms all the Downton women — even the no-nonsense Dowager Countess, who swoons right off the settee.

Jeremy Piven also makes a cameo in his “Mr. Selfridge” role, making a special fashion delivery to the ladies. His legendary salesmanship even wins over Downton’s curmudgeonly butler Mr. Carson, who holds up a pair of scarlet-red shoes and asks whether they come in a size 13.

Though Lord Grantham is shocked by all he sees — “Downton has gone to rack and ruin without me,” he discovers — all comes out well in the end: His loyal downstairs servants save the day by pooling together their savings to help him keep the family estate.

Here, a look at Clooney’s day on-set with the Downton gang: