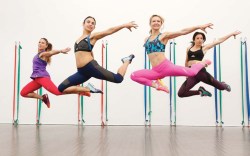 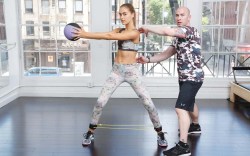 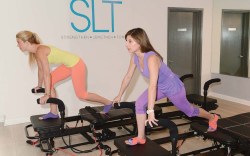 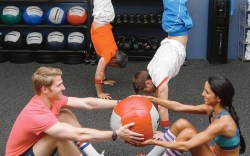 Six of New York’s most in-demand trainers put clients through their paces in performance footwear tailored to their unique fitness philosophies. Here, WillSpace’s Will Torres spars with Paul Wilmot Communications partner Kate Doerge, a testament to his precise approach to physical engineering. A bold-face favorite, Torres also tends to the buff bodies of Andy Cohen and Julia Restoin Roitfeld. “I create a program that is specific to each client’s individual goals. It’s all very methodical,” he said from his West Village gym. Added Doerge, “I have Will to thank for these arms.”

Body by Simone
Classically trained Australian dancer Simone de la Rue isn’t just teaching clients her rigorous technique, which combines cardio, Pilates and strength training into catchy choreographed routines. Indeed, the plucky woman responsible for the taut physiques of Naomi Watts, Anne Hathaway and Matt Damon also picked up a thing or two from the A-list along the way. Though she won’t name names, Footwear News learned it was Sandra Bullock who turned de la Rue on to her now-signature Newton runners.

“I often get introduced to new products from my celebrity clients. She wore them because her sister used to run marathons. I was attracted to the color and thought they looked cool,” de la Rue said from her airy West Chelsea studio. “Then she explained that they are used for running to push you onto the balls of your feet. I tried on a pair. They were so lightweight, breathed and felt almost like a dance shoe. I became obsessed.” Ten pairs later, de la Rue now sells the brand’s Gravity style at her two locations and provides loaners for first-timers.

“We just opened in Los Angeles and everyone has been coming in their standard shoes. They do one class and their calves hurt because it’s high-impact jumping,” said de la Rue. “I always suggest Newtons. Clients say it makes such a difference, especially for the dance cardio class.”

modelFIT
Photographer Terry Richardson’s former studio on the Bowery is now where trainer Justin Gelband sculpts a host of camera-ready models (think Karlie Kloss, Candice Swanepoel and Irina Shayk) into Victoria’s Secret shape. “It’s like a piece of clay I mold,” he said. While chipping away at both supermodels and mere mortals through his own unique blend of movements, which focus on balance stability and functional training, Gelband also weighs in on shoes. “It all starts from the ground up. It’s imperative to me that they wear good footwear. I’m into these APLs right now for their stability. Ankle and sole support are key.”

The Client:
Ford model Stephanie Smith began sessions with Gelband as soon as she landed in New York from her native Melbourne. “I had to discover what it was all about. He works with the biggest and best models, so he must be good.” Just three weeks into her training, she’s noticed a difference. “He’s changing my body.”

SLT
“It’s like Pilates on crack,” said trainer and owner Amanda Freeman of her popular group reformer classes, which promise to strengthen, lengthen and tone quickly for folks on the go. While her technique eschews traditional shoes, toe socks, slippers and hybrid foot wraps are welcome. “We saw a cute pair on somebody and had to get them for the studio. It’s for sanitary reasons and for grip. But we still want to look good.”

The Client:
Los Angeles-based fitness entrepreneur Louise Tabbiner, co-founder of the “Burn This” workout booking app, is an SLT regular when she’s in town. “I wear ToeSox or my Reebok ballet slippers. I keep them in my bag for whenever I have time to squeeze in a class between meetings.”

Throwback
“We keep it competitive and fun,” said Brian Gallagher. He and co-founder Ryan Wilke are like the gym teachers you wish you’d had – whistleblowing jocks who make all team members feel like MVPs. “There wasn’t a [gym activity] offering for guys out there. We found that when we trained together, we pushed ourselves harder. It’s about forgetting that you are working out.” Their old-school fitness classes – which include rowing, resistance training and riffs on recess games (tag, capture the flag) – also extends to their nostalgic shoe selections. “We like to keep it classic,” Wilke said of their retro runners and tube socks.

The Clients:
Gallagher’s girlfriend Noor Ahmed (who works in advertising at Pfizer) and his brother Matthew (a marketing director at Time Inc.) are frequent Throwback class attendees.

Physique 57
With bodies of work including Chrissie Teigen, Kelly Ripa and Norma Kamali, much ink has been spilled about this firm’s ballet barre-based 57-minute workout. Instructors, such as Christina Jensen, lead intervals of cardio, strength training and stretching, all in the name of long, lean muscles. Instead of sneakers, they wear the studio’s own socks with added traction. “For stiletto wearers, grounding your heels is good for the Achilles,” said Jensen.

The Clients:
Physical therapist Morgan Manasse Borsen (who recommends the method to patients) and tech entrepreneur Victoria Meakin have been coming to Physique 57 six times a week since the first studio opened in 2006. There are now seven locations, in such areas as New York, the Hamptons, Scarsdale, N.Y., Los Angeles and Dubai.