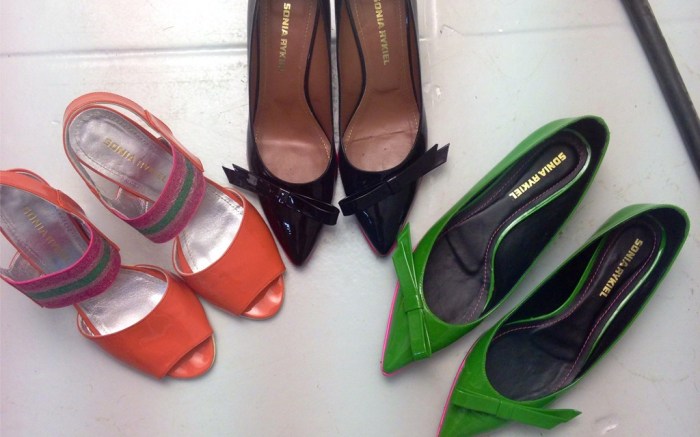 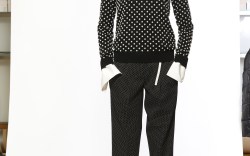 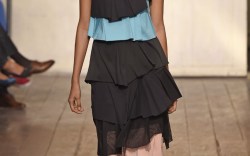 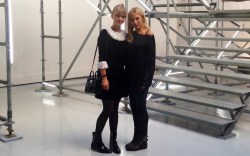 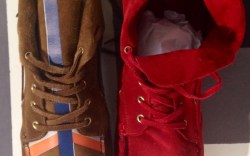 10:30 a.m.
After the Sonia by Sonia Rykiel presentation, PR director Lola Rykiel (granddaughter of the brand founder) takes us backstage for a closer look at the footwear. Patent kitten heels, knitted strap pumps and flats are piped in pink – very Rykiel.

11:20 a.m.
Cedric Charlier is already showing great potential in the high-contemporary dress department. But his shoes are also full of verve. Leather slides with great big twist ties sum up the mood of the whole collection: easy femininity. Comfort is certainly in the air this season.

12:15 p.m.
Over to Bastille to visit Jerome Dreyfuss. Immediately gravitate towards his hand-painted moccasins. Turns out they are a tribute to a cobbler friend of his in Ibiza who recently passed away. They ended up inspiring the Spanish theme of the collection this season.

12:30 p.m.
Dreyfuss takes a stance in front of his newly expanded footwear collection. “It went very well last season,” he says of his baby steps into shoes. “But leather prices have gone up so much. I have to be conscious as my girl doesn’t want to keep paying more and more — I don’t increase my prices as that’s not fair to those who have been buying my things since the beginning.” We talk more about the ever-rising ceiling for footwear and how it is currently outpacing handbags in terms of market growth. “I’m not there yet,” admits the designer, who is best-known for his handbags, such as the Billy. “But the thing about shoes is they completely change your look. It’s powerful.” Indeed. The clock ticks and I have to run.

1:14 p.m.
Over at Pierre Hardy, it’s all about celebration. This weekend, he is throwing a disco-themed fête for the 15th anniversary of his eponymous line. Riotous styles expand upon his love of architectural shapes that expertly balance advanced geometry with classic lines. Hexagonal heels and colorful abstract appliqués are impressive.

3:42 p.m.
The Dries Van Noten finale. Suspected that footwear would be on the sensible side based on the mossy carpeted runway. Bulbous wedges, mainly in white, black or tan, add a shock of starkness to the all the soft layering and intricate patterns.

4:15 p.m.
Dandy on wheels. These brogue blades at Robert Clergerie are limited edition, by special order only and incredibly silly. I’m smitten and a little scared all at once.

5:32 p.m.
At Rochas, a distinctly Parisian take on normcore via logo tube socks and paillette slingbacks. Designer Alessandro Dell’Acqua already showed us in Milan that he has a way with zeitgeist footwear. Circling this for Shoe of the Day.