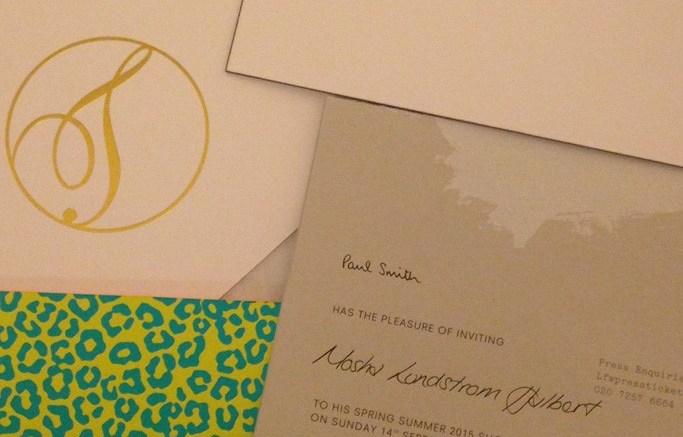 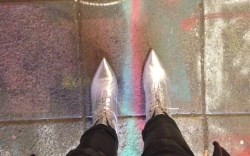 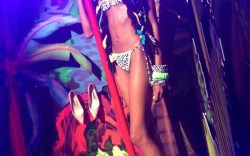 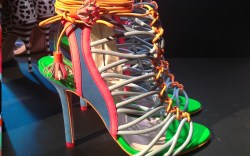 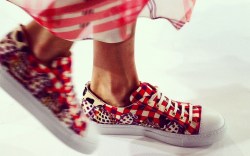 Noon
Follow the graffiti (and booming house music) down a grotty alleyway to Sophia Webster’s presentation.

12:16 p.m.
Worth it. The presentation is entitled “Jungle Is Massive.” With swaying models in full rave regalia and tropicana-themed footwear, the title rings true.

12:20 p.m.
Editor’s pick and also one of the more sedate styles. It’s all relative when is comes to Webster.

12:30 p.m.
Bumped into Erica Pelosini of Louis Leeman while exiting. Had to get her picture in front of the vivid graffiti wall, which worked so well with her Temperley dress. On to their show.

2:25 p.m.
Alice Temperley – known best for dressing the Middletons in appropriately formal frocks – did a footwear about-face this season. Every look was paired with her new line of sneakers.

3:30 p.m.
Precariously-heeled sandals at Topshop Unique appeared to bend back as models took their strides. The last thing a footwear editor likes to see is faulty shoes. Thankfully, no models were hurt.

4:30 p.m.
The simplicity of the heeled spectator at Paul Smith.