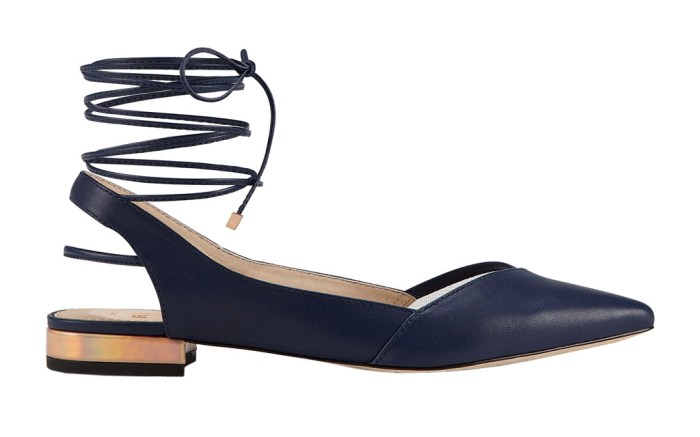 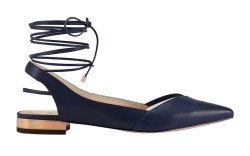 For her capsule collection with footwear retailer Aldo, Misha Nonoo went on a 12-hour designing spree. And it involved a lot of sweets.

“It was a very collaborative process,” said Nonoo, who designs women’s wear in New York. “We got our scissors out and started cutting things off and adding things on. We had these delicious chocolate treats that kept us going.”

Of course, the collaboration, part of the continuing Aldo Rise initiative, had been in the works for months, but in typical industy fashion, the bulk of the work was done in a single-day vortex at Aldo’s headquarters in Montreal, Canada.

The end result is an edited selection of footwear and handbags that hits Aldo stores in March.

The footwear offering, inspired by the idea of wrapping and tying, features a strappy leather stiletto and Aldo Rise’s first flat shoe, which is a pointy style with a removable ankle strap. The line was produced in China and ranges in price from $65 to $160.

“I’m very much a flats girl — I had heels on earlier today, and I’ve already got them off,” Nonoo joked. “But there’s a glamorous side of my girl, so I wanted to do a beautiful heel. The wrapping and tying was an aspect from [my ready-to-wear] collection that I wanted to pull in. I created an oversized pocket on skirts and dresses, then wrapped it around the waist.”

Born in Bahrain and raised in London, Nonoo launched her namesake apparel label in February 2011 and has landed placement in top retail accounts such as Bergdorf Goodman and Shopbop.com. The Aldo Rise collection represents Nonoo’s first foray into designing footwear; the styles premiered during her spring ’15 runway show at New York Fashion Week in September.

For their part, Aldo executives said they were attracted to Nonoo’s classic focus and subtle design aesthetic.

“We had been following Misha for a few seasons and were drawn to her luxurious, yet accessible collection,” said Douglas Bensadoun, chief creative officer at Aldo. “Contrary to popular perception, the most daring fashion can sometimes be rather quiet — not showy or ‘out there,’ but decidedly confident.”

They should know. The company has collaborated with several brands, including Preen, Ostwald Helgason and J.W. Anderson, through its Aldo Rise initiative, where the company shares its resources to help emerging designers craft a capsule collection.

The partnership with Nonoo officially began back in June. Nonoo led the design process, while Aldo provided both sourcing and design aid, tweaking Nonoo’s preliminary moodboards to fit both its own customer and a wider commercial base. “Being able to start with all of Misha’s inspiration boards, color stories and textile swatches made it easy to build a cohesive collection,” said Jackie Yermus, Aldo’s senior footwear designer.

After Nonoo hammered out her prototypes at Aldo’s headquarters, Yermus offered up her knowledge of the brand to further strengthen the line.

“My first concern was shelf appeal,” said Yermus. “When you see the [strappy] shoe on the shelf — and not on a model’s foot — it can be tricky.” To solve this problem, Yermus added a loop to the slingback on the flat shoe, allowing the leather tie to be removed for shelf display.

It was all part of the learning process for Nonoo, who said she was surprised at the intricate and technical process that goes into designing accessories. “The level of functionality that has to occur to make the shoe workable is definitely not something I’ve thought about in-depth before,” the designer said. “Even the cushion inside of the shoe, the coloring and the pads that go underneath it — those are things you just take for granted.”

Fortunately, Aldo’s team was pleased with Nonoo’s restraint and streamlining throughout the collaboration — not an easy feat for first-timers. “If you’ve never designed shoes before, you can go quite mad,” Yermus admitted. “But it was a focused collection that was tailored to our customers.”