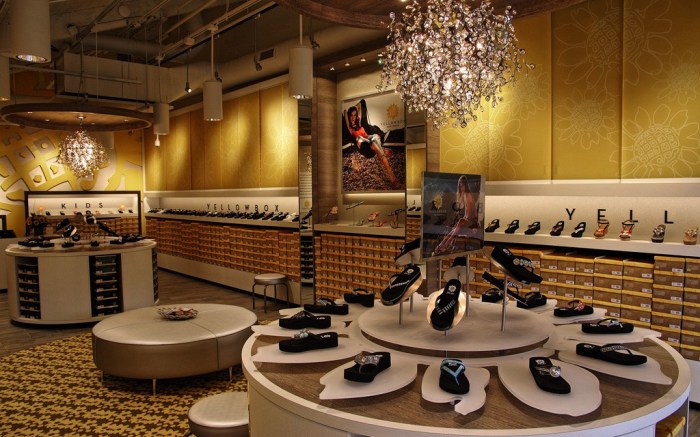 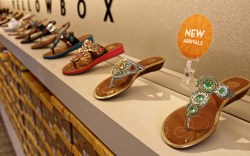 “Yellow Box was a great, recognized brand, with a lot of loyalty from customers without a storefront or flagship retail environment,” said Christopher Lanning, SVP and GM of ABG. “We felt like there was tremendous opportunity to leverage those great attributes, the iconography and great product in a retail environment.”

The venture is a big one for both ABG and Yellow Box, which are new to managing independent storefronts. Lanning said ABG had long been looking to find a way to break into managing retail stores, and not just shoe departments for stores like Stein Mart and Gormans. Yellow Box was ready to explore direct-to-consumer options also as it expanded styles to include boots and flats to better balance the business.

Each of the stores ranges between 1,000-2,000 square feet and feature the sunflower logo of the brand in the décor. The first store opening was in June at Simon Property’s The Falls Mall in Miami, followed by an August opening at the Westfield Topanga Mall and a September 18 debut at the Westfield Fashion Square mall, both near Los Angeles.

“Instead of market specific, we thought more of a high fashion, high traffic, high visibility fashion and lifestyle centers; cities where people value and cared about fashion and didn’t want to have what everyone else is wearing,” said Lanning. “It’s a casual sophisticated lifestyle in Miami and we think there is a great market and growth opportunity in that part of the country.”

The companies are testing the success of the three to five stores over the next two years, but Lanning said the possibility certainly existed to transform it in to a major chain across the U.S. if the initial phase goes well. Another undisclosed location will open by the end of the year.

For Yellow Box’s part, the new stores have been a major education in product and consumer.

“Over the years we’ve wanted a retail presence so you can get your brand perspective out to the consumer the way you want it to be, instead of in the context of a department or independent store selection,” said Jack Oerth, SVP of sales and marketing at Yellow Box.

During the first few months at the Miami location, approximately 20 percent of sales have been for the non-traditional Yellow Box styles—flats, wedges, and boots.  The company expects the same to hold true at other locations.

Additionally, the children’s collection has performed above expectations in store.  Yellow Box and ABG said the “mom and me” concept was a significant opportunity that the brand hopes to expand on in the future. Premium product, which retails at $95, also have sold well.

“We were pleasantly surprised that there wasn’t the price resistance we anticipated so it frees you up to be a little more creative [and try things,]” said Oerth. “I think by having the ability to design the product into what we see her picking is going to make it better all the time. I think that what she’s telling us today is that number one she wants vey casual product but she wants casual product to be able to take her all day long.”