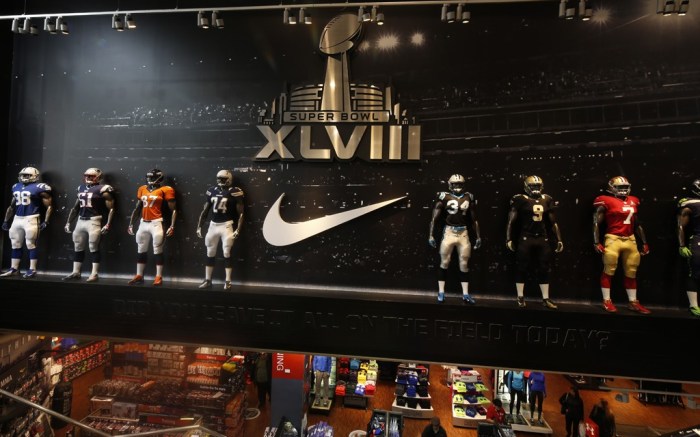 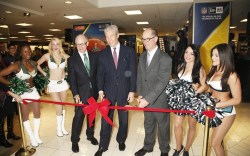 Retailers in New York and New Jersey are hoping to score in the days leading up to Sunday’s big game. Super Bowl XLVIII is expected to bring around 400,000 visitors to the area, and the almost-weeklong festivities could inject as much as half a billion dollars into the local economy, according to the host committee.

“To have the Super Bowl here is a major draw and a major reason for people to come,” said Terry Lundgren, chairman, president and CEO of Macy’s Inc. “It’s going to be a big boost to New York City.”

In Manhattan, the National Football League is creating Super Bowl Boulevard, which will stretch from 34th Street to 47th Street on Broadway, from Jan. 29 to Feb. 1. The street is being transformed into a football playground with free events, concerts and the NFL Rush Zone and NFL Play 60 interactive experiences for families.

Storeowners along the 13-block stretch are eager to welcome fans.

Modell’s Sporting Goods has been planning special Super Bowl shop-in-shops with the NFL and Nike for the past year, and CEO Mitchell Modell said the retailer’s Time Square location will be at the center of much of the activity.

Besides installing themed product displays, the store is hosting events throughout the days leading up to the Super Bowl, including a panel with sports columnist Mike Lupica and a red-carpet event with Alyssa Milano, the face of Touch by Alyssa Milano, a women’s NFL apparel collection. And three other stores in the city will host special brand shops.

While Modell declined to comment on specific numbers, he predicted the company will benefit in terms of both sales and added name recognition.

“This is an opportunity to create great energy,” said Modell. “[We want to] reinforce that we are the destination when it comes to licensed merchandise. It means more to us than doing business.”

As one of the key retailers for officially licensed product, Modell’s also has been adding staff to prep for the crowds looking for gear. All told, the firm is expected to hire around 50 additional store associates during the period.

At the southern end of Super Bowl Boulevard, Macy’s has opened a 36,000-sq.-ft. space on the fourth floor of its Herald Square flagship, to house its “NFL Shop at Super Bowl.” (After the space closes Feb. 4, it will become part of the men’s department.)

“We have something really big here and many [visitors] will visit Macy’s because it is a large tourist destination,” Lundgren told Footwear News. “We certainly hope to get a lot of positive momentum from that.”

The shop, a partnership between Macy’s, Lids Sporting Group and the NFL will carry licensed Super Bowl items and play host to events throughout the week.

Also at Macy’s, The Finish Line, which is the department store’s partner on athletic shop-in-shops, will display the Nike Flyknit collection, as well as other Super Bowl merchandise from the brand.

“The Super Bowl is an iconic, mega-cultural event that has international reach,” said Sam Sato, president of Finish Line. “Visitors in the Finish Line shops at Macy’s will find elite product offerings and enhanced display presentations with a focus on NFL partner Nike.”

Meanwhile, some footwear brands are hoping to cater to fans seeking to warm up, especially since temperatures are expected to remain frigid for the next few weeks. (The game will be played at MetLife Stadium in East Rutherford, N.J., the first time a Super Bowl has ever been played outdoors in a cold-weather location.)

For example, Ugg Australia has created a mobile shop called the Ugg Warming Station. It will stock earmuffs, gloves and scarves retailing for $75 each and also serve hot chocolate to visitors along the Super Bowl Boulevard.

Elsewhere in the city, Baltimore-based Under Armour Inc., which is a glove and boot supplier for the NFL, is planning a one-day event at Vanderbilt Hall at Grand Central Station on Jan. 30.

The company will use the occasion to promote the launch of its SpeedForm Apollo shoe, which was designed to have a “zero distraction” fit for the runner, with a silicone heel and a minimalist footbed.

“We wanted to throw a big party for this launch,” said Steve Sommer, VP of global marketing for Under Armour. “We wanted something interactive and engaging, and [having] the campaign timed with the Super Bowl will maximize impact.”

Bloomingdale’s sought to tap into the Super Bowl excitement as well, but with a fashion twist.

The department store, with the help of the NFL and Council of Fashion Designers of America, partnered with 48 designers to create one-of-a-kind helmets for the sporting event.

The helmets also will be up for auction until Feb. 4, with all proceeds benefiting the NFL Foundation.

Frank Berman, EVP of marketing for Bloomingdale’s, said the helmets, on display in store windows, give the retailer an opportunity to create interest among its fashion-conscious consumers.

“I believe this display and project is uniquely us. And of course, with all the publicity with the Super Bowl and New York as the center of it, there will be opportunities for guests to enjoy [this]. We know we’ll draw people in, we just hope to draw them in to shop, too,” he said.

While it’s clear that companies have been beefing up marketing efforts, smaller players are mixed on the impact of the big game, especially retailers located outside the major tourist areas.

At sneaker store West NYC on the Upper West Side in Manhattan, owner Lester Wasserman said most of the football-related buzz at his store was concentrated on last Monday’s launch of Nike’s new Super Bowl collection, called Super Speed. The Nike Air Trainer 1, Trainer Max 94 and Trainer SC Lunar styles all nearly sold out around 24 hours after their release.

But beyond that, he isn’t expecting a lot of added sales.

“We don’t have specific plans for the game, and we might see an uptick in business, but it probably won’t be as much as Soho or Times Square,” he said. “Let’s hope people need warm boots and we can continue to sell what we have left.”

In Teaneck, N.J., at athletic shoe store Packer Shoes, owner Mike Packer said he likely won’t see any marked difference in sales as a result of the events.

“Most of our business will be from our 10th anniversary and the Asics collaboration launch around the same time,” said Packer. “We have a few licensed [NFL] things, but that’s not necessarily what our customer is looking to find.”