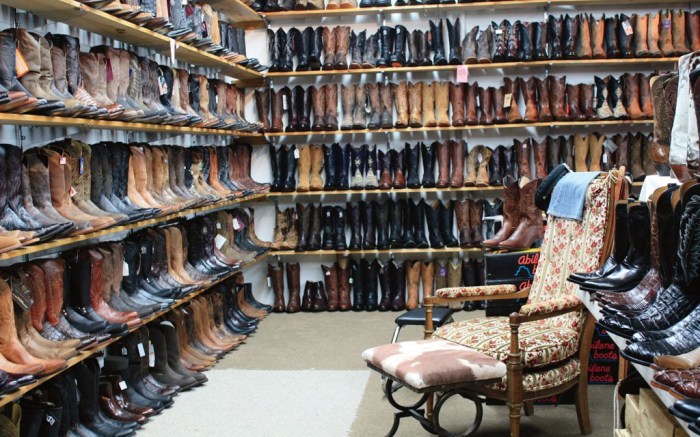 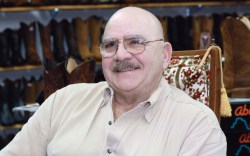 Boot Hide Out is getting easier to find. The Florida-based retailer recently bowed two locations in New Jersey and is readying to add another this year. And according to owner and New Jersey native Quin D’Imperio, future plans include turning the chain into a nationwide franchise. Such moves are helping the retailer hit an anticipated $3.5 million in sales for the fiscal year ending June 2014.

With the biggest selection of Western boots in the Northeast, Boot Hide Out showcases its more-than-2,000-pair inventory on floor-to-ceiling shelves on the selling floor of each store. “People can get the full impact [of the selection],” said D’Imperio, who stocks such brands as Lucchese, Justin, Corral, Nocona, Black Jack and Ariat, among others. “Today’s boots are like works of art. They’ve never been as beautiful, featuring crystals and overlays.”

While the chain’s newest locations — a 1,400-sq.-ft. space in Hamilton, N.J., and a 3,400-sq.-ft. store in Paramus, N.J. — may be a far cry from cowboy country, D’Imperio said the areas have their share of boot aficionados who spend anywhere from $150 for Dingos to $10,000 for exotics by Lucchese. “There are people who really get into [the style],” said D’Imperio, who shuttles between the New Jersey locations. “Trends help. But they are not the mainstay of the business.”

As a result, Boot Hide Out’s customer base is wide ranging. The stores cater to everyone from fiftysomething men looking for alligator boots to younger guys dressing up to go to clubs. Women, however, account for 60 percent of sales, noted D’Imperio. “Girls are wearing shorts with boots and hats to Western concerts,” he said, citing the influence of country music stars Carrie Underwood and Taylor Swift. Just last summer, a stream of customers stopped into the Paramus store for boots and accessories to wear to a Kenny Chesney concert held in nearby MetLife Stadium.

For Ed Romano, Northeast and Mid-Atlantic territory manager for Corral, Boot Hide Out’s Paramus location on Route 17, one of the area’s busiest thoroughfares, has boosted his brand’s exposure. Corral is the store’s No. 2 women’s brand in terms of sales. “Boot Hide Out is the biggest boot dealer in the Northeast,” said Romano. “It draws lots of different customers.”

D’Imperio, a former rodeo roper and East Coast sales rep for several leading boot brands for 30 years, decided to wind down his life on the road in favor of retailing in 2008, when he launched both Leatherstoboot.com and Boot Hide Out in the tourist destination of Tarpon Springs, Fla. The latter served as warehouse space for the website.

Today, D’Imperio’s online businesses also include Boothideout.com, Lucchesecowboyboots.com, Blackjackcowboyboots.com and Boottownusa.com. The many sites are part of a strategy that the owner said casts a wide net and ensures that customers find him online. In addition to the more than 6,000 pairs held in inventory in the trio of stores, an expanded selection can be drop shipped directly from individual vendors.

“You need a full-fledged e-commerce business to make it today,” said the retailer, noting that 25 percent of Internet sales come from Russia, Germany, Singapore and Belgium. E-commerce accounts for half of company sales, he added.

To promote his businesses, D’Imperio spends an average of $100,000 a year on GoogleAdWords and markets the New Jersey stores through area billboards, in addition to ads on New York’s Classic Rock station, Q104.3, and New Jersey country station Thunder 106. Together, they draw customers from neighboring states.

The media blitz helps Boot Hide Out connect with a built-in customer base in the Paramus area. The popular Globe’s Boot World had operated there for 30 years before shutting its doors two years ago. D’Imperio tapped its former co-owner, Gregg Hodgins, to run the newest Boot Hide Out store. While Hodgins manages the store, CFO Kyle Bennett does the buying for the chain. “Gregg had a following,” D’Imperio said. “The only challenge was letting people know boots were back in Paramus.”

Jeremy Snyder, Northeast sales rep for Lucchese, credited D’Imperio for seizing an opportunity. “The store recaptured [Globe’s] market,” he said. “Every day, it gets a customer who knows Gregg. Between Quin and Gregg, they have more than 60 years of [industry experience].”

Still, D’Imperio takes his success with a degree of humility. “I didn’t reinvent the wheel. I’m feeding a trend that’s been around forever,” he said. “Kids wearing boots today will be with us forever.”

*This article has been updated to correct Marshall Brown’s employer. He is a representative for Dan Post Boot Co. and not Justin as the story had indicated.