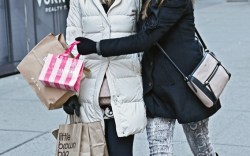 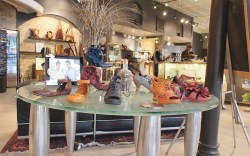 As snow and frigid temperatures pummeled much of the country again last week, retailers told Footwear News they are banking on brighter days ahead. Still, they acknowledged the prolonged winter could impact full-year sales.

For now, though, they are focused on fueling business with ramped-up marketing efforts and special product initiatives.

“We began national advertising for the first time ever and will run commercials in April [on cable TV],” said Cliff Sifford, president and CEO of Shoe Carnival. “That will reach more customers and get them in markets where we don’t have stores yet, which will boost online business.”

In terms of spring, Shoe Carnival’s sandal sales are on the rise, according to EVP and GMM Carl Scibetta, who reported double-digit increases across the category for men, women and children, compared with this time last spring.

“Customers gravitate toward two-piece silhouettes, novelty wedges and shoes with laser-cut detailing,” Hugonnet said. “We’ve seen a lot of demand for the gladiator, whether high-heeled or flat. Nudes, tans and black are leading the way for color.”

Kohl’s Corp. expects more closed-toe booties to perform well this season. “There definitely has been a strong response to those looks and to casual sneakers in fresh spring colors,” said Sofia Wacksman, Kohl’s VP of trends.

For independents, the mood in early spring is mixed.

Ryan Dardano, manager of Denver-based Dardano’s Shoes, pointed out that Colorado is prone to snowfalls until May, so the retailer is used to enduring erratic winters.

Still, sandals are selling already, and the store brought in even more stock this year to accommodate an expansion.

“The last week of February is when we receive all our spring product, so we’ve been integrating that. We have a mix of fall leftovers and spring newcomers,” he said, listing OluKai, Dansko and Keen as best-sellers.

In Philadelphia, Josh Love, manager of Benjamin Lovell Shoes, said the key to starting the season on a strong note is to connect with consumers about new items hitting the shelves. “We keep in touch with customers whenever the weather changes and tell them what comes in as soon as it does,” he said, noting that weather had no effect on the buying season. “We bought the same as we always do.”

Love added that Fly London, Clarks and transitional styles by Arche have performed well in recent weeks. He predicted 5 percent to 10 percent sales growth this spring compared with last year.

Retailers in the Midwest weren’t quite as upbeat, particularly after winter weather forced some to periodically shut their doors this season.

“We closed several days at a time,” said Scott Starbuck, CEO and founder of Chicago-based City Soles. “You don’t get that money back.”

Despite the setback, the retailer said business is recovering well. “When you see people in shorts on 50-degree days, you know people are more willing to open up their wallets,” he said.

Right now, transitional footwear is selling best at the store, with ankle-cut and Western looks by Modern Vice, Sendra and Coclico leading the pack. Starbuck attributes high-fashion boot sales to customers gearing up for music festival season, during which classic boots are often trendy.

“I always buy with the optimism that the seasons will come on time,” Starbuck said of his strategy. “When I bought for spring, I assumed it would be business as usual, but January and February proved otherwise. We never double up on anything to make up for lost sales. May is usually a time for reorders, but those might be down this quarter because business wasn’t booming at the start of the year.”

On the East Coast, Rick Lee, owner of Brooklyn, N.Y.-based Soula Shoes, is taking a cautious approach to the season. “We bought less than we did last year and saved some money for in-season fill-ins as spring finally gets closer,” he said, predicting that business will pick up closer to mid-May or June, versus the typical March-and-April period.

Retailers in the South also were hard hit this winter. Main & Taylor, a high-end women’s boutique with locations in Greensboro and Raleigh, N.C., had to close its doors for several days this season. In response, co-owner Diane Chinnis responded by extending discount sales on in-demand items. “Customers needed leather and waterproof shoes to make it through, so we kept the sale on longer,” she said.

“We try not to buy things that are so tied to spring that they can’t work for summer. Sneaker bottoms, for example, are shoes you can wear right now because it has more foot coverage, so you’re not slipping right into a sandal. Those will go on through summer,” she said.

Additionally, Stuart Weitzman’s shoes are a big draw for her customers. They’ve sold so well, in fact, that Main & Taylor has opened a mini-concept store dedicated to the designer’s product.

“We always do well with the shoes because it’s one of the few companies that carries narrower widths,” Chinnis said. Another special vendor event in the works is a Good Friday store appearance by Donald Pliner, whose Signature line is stocked by the retailer.

“We’re entering a space where, as a store and as an industry, all the old rules are not in play anymore, so there’s something for everyone,” Chinnis said. “And that’s in the South, where you have a more conservative customer.”

Zappos.com has always recognized the power of a diverse assortment. Natasha Pace, the e-tailer’s trend manager, said that when the site introduced its trend-conscious vertical, The Style Room, in spring ’12, it prioritized a more-curated shopping experience for customers.

“We have our buyers scope out trends and we name them on the site,” she said, adding that new spring trends such as kaleidoscopic prints or rose-colored metallics go under specialized hubs. “We’ve been learning [through market research] that people want very specific options. Now you can find a pastel color on a combat boot.”

For their part, industry analysts are concerned about how a late spring sets the tone for the rest of 2014.

“Everyone I’ve spoken to has been managing receipts to the pace of sales of leftover winter product,” said Steven Marotta, an analyst at CL King & Associates. “Items [that were] on reorder are not anymore, and fewer new items are being taken in.”

Paul Swinand, an analyst at Morningstar, noted that while overall margins “probably look good” as winter footwear clears out, the success of spring styles will prove a guessing game for retailers.

“Let’s say it’s cold for another month: If you’ve got broad inventory on seasonal spring items, whether it’s sandals or cleats, and it doesn’t sell, then you’ll have to mark it down,” he said.

But inventory isn’t everything.

“Even if someone manages their product well and has lots of variety, it’s too soon to tell and no guarantee that businesses will [ultimately] see revenue,” said Sterne Agee analyst Sam Poser.