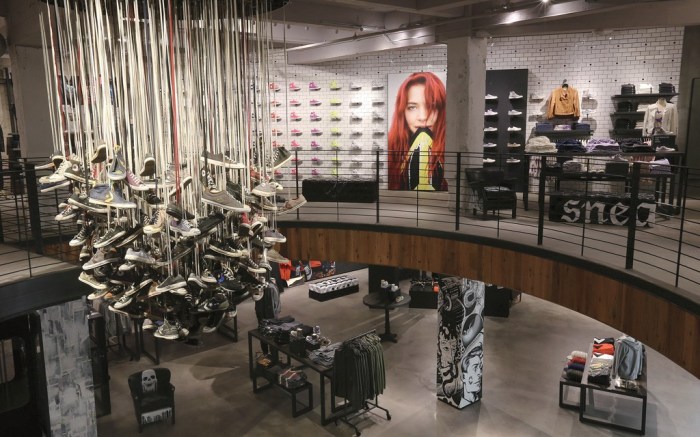 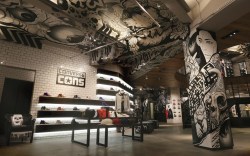 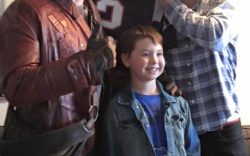 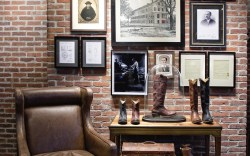 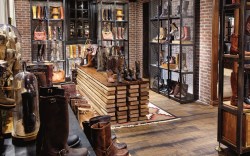 With online competition casting an ever-bigger shadow, brick-and-mortar stores continue to pull out all the stops to appeal to customers.

For years, retailers have relied on the one thing e-tailers couldn’t: the look of their stores and the experiences they give customers. Now merchants increasingly are turning to design to make a dramatic statement, whether it’s working with a famous architect to heighten the in-store drama or harnessing the latest technologies to incorporate interactive elements into the retail space.

“It’s all about getting noticed,” said Michael Gatti, studio director for Gensler, an architecture, design and planning firm whose clients include Barneys New York, Sigerson Morrison and Reebok. “You have to figure out what’s going to make the customer stop and shop. Something needs to turn their heads, draw them in and get them to stay.”

Ron Singler, principal of Seattle-based Callison, agreed, noting the growing trend for online shopping demands that retailers change the way they look at their physical stores. “It’s no longer necessarily about a transaction. Stores can be used for different purposes, like building a fan base for your brand,” said Singler, whose firm has designed shops for Sperry Top-Sider, Skechers and Nike. “We’re seeing a push to make the retail space less transactional and more experiential, and design is a powerful way to do that. The idea is to offer something the Internet can’t.”

Designed to Impress
To capture consumers’ attention and offer a unique in-store experience, some firms have sought out prominent architects to set the stage for their products. Stuart Weitzman tapped Pritzker Prize winner Zaha Hadid to envision a bold new retail concept for his brand. The first location debuted in September on Milan’s Via Sant’Andrea, followed in March by a second door in Hong Kong’s IFC mall. Similar stores are planned for cities including Rome, New York and London.

Hadid’s concept features a spaceship-like interior with the fluid, sinuous forms common to her work. Curved walls swoop down from the ceiling, and shoes are arranged on sculptural displays made of fiberglass trimmed with rose gold. The idea, Weitzman said, is to enhance the relationship between the customer and the collection.

“We wanted to create a unique and unexpected environment in which a woman would be surrounded by shoes and bags rather than simply selecting them from wall shelving,” he said. “The modular [display] units are strikingly futuristic and visually compelling, and the free-flowing curves and rose-gold accents create a subliminally sexy atmosphere.”

Similarly, Camper has drawn crowds with its latest Together concept, which debuted last year in New York and Madrid. The avant-garde design, conceived by Japanese architecture firm Nendo, puts shoes in the spotlight. A stark, minimalist interior features walls covered from floor to ceiling with rows of ghostly white resin models of Camper’s iconic Pelotas style. In contrast to the all-white interior, the Spanish brand’s colorful collection is arrayed on platforms in the center of the store. Oki Sato, Nendo’s chief designer, said the concept addresses a common challenge for footwear stores. “Shoes are relatively small items, especially when incorporated into a larger retail space,” Sato said. “We used the resin models to fill the walls, adding volume to the space and creating the orderly feel of a stockroom. The actual shoes [being] sold stand out against the white walls, rather than getting lost in the space.”

Local Flavor
In their quest to woo customers, retailers also are abandoning the old cookie-cutter rollouts in favor of tailoring stores to individual cities and neighborhoods. “Local flavor is very important,” Gatti said. “Regionalizing a design is a great way to connect with the local community and provide a strong customer experience.”

Singler noted that localization could be anything from hanging up community message boards or installations by local artists, to repurposing existing buildings and using native materials.

When Converse moved to San Francisco last year, the sneaker brand worked with architect Jennifer Carpenter to create a store design that pays tribute to the city’s vibrant arts scene. The 8,200-sq.-ft. flagship is housed in a Union Square building that was stripped down to its original concrete-and-wood framework, giving it a raw, industrial feel reflective of Converse’s brand aesthetic. “A sense of authenticity is important,” Carpenter noted. “I try to find things about a site that are specific and that can remain in the project and make it special and true to that particular location, as opposed to rolling out stores that all look the same.” A sprawling black-and-white mural wraps the store’s ceiling and columns, providing a striking focal point. The mural was created by Montreal-based art collective En Masse in collaboration with area artists. All the furniture was custom detailed by local graffiti masters, and the second floor features a dedicated gallery space where San Francisco artists, from photographers to muralists, can share their work with the community.

“Our stores become part of the neighborhood, so they feel like an independent store rather than part of a programmed expansion,” he said.

Community Ties
Other brands have taken the notion of localization a step further, with stores that seek to forge a deep connection with the community. Take, for instance, Toms Shoes’ newest retail outpost in Austin, Texas.

Founder Blake Mycoskie’s vision for the store stretched beyond simply selling shoes. He said his hope was that the shop, housed within a renovated Victorian home on trendy South Congress Avenue, could become a gathering place for Austin residents. Only half of the 2,400-sq.-ft. property is devoted to retail; the other half includes indoor and outdoor spaces for music and public events, as well as a café that brews the brand’s new line of coffee.

“[Austin] has a lot of local pride, so it’s important to us that our new neighbors know we are invested in them not as customers but as our friends and family, which is what they become,” said Mycoskie, a Texas native. “We [strove to] create a space that has a sense of home, community and history blended with our unique Toms personality. As opposed to just [a place for] a business transaction, we want the store to feel like your best friend’s backyard, where you can bring your dog and see your neighbors.”

Tech Support
With technology changing the landscape, retailers also strive to merge their online and in-store worlds. “Somehow the two need to work together. Creating interactive store experiences is critical to that mission,” Gatti said.

Adidas is one brand that uses design and technology to enhance its retail experience. Earlier this year in Beijing, the German athletic giant unveiled HomeCourt, an immersive store concept that celebrates the world of sports. Touted by the company as the “next generation of retail,” the store features an arena façade, as well as a stadium-inspired tunnel entrance that welcomes shoppers with a “sound shower” of cheering fans. Footwear has pride of place in the center of the store, where an interactive shoe bar equipped with touchscreens allows customers to explore the features and benefits of different shoe models. The Team Room offers a fitting area, comfortable seating for socialization, video screens and the possibility to connect mobile phones and music. “We reference sport in every element in the store, from the materials to the inspirations of the designs to the tools we use for storytelling,” said Ted Mager, head of retail environment for Adidas, which plans to roll out the concept to 25 stores globally by year-end.