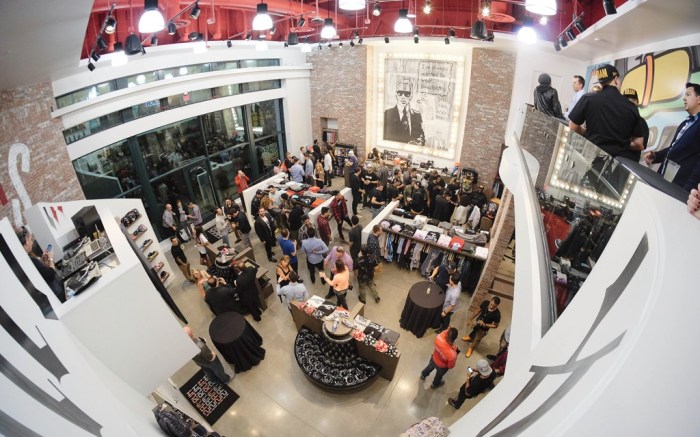 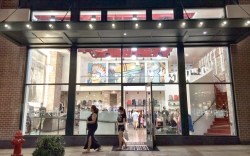 With one simple tweet from rapper heavyweight Nas, Las Vegas sneaker store 12am Run was declared open for business.

“[Nas and I] were walking the property in hard hats a year before we’d even broken ground, and he started tweeting that he was on the site of his new sneaker shop,” said co-owner Nick Sakai. “He saw the space and was all-in in five minutes.”

12am Run (read as “Midnight Run”) opened its doors in April at Rick Caruso’s outdoor retail center The Linq. In a few short months, the sneaker shop — co-owned by Nas, Sakai, Dee Murthy and Anthony Saleh — has become a major retail destination for the city.

Sakai said the secret was to give the customer that over-the-top Vegas experience but at an accessible price point.

“If you didn’t have $2,000 in your pocket, you couldn’t shop [the Strip],” Sakai said. “It’s a weird dynamic where there are the Louis Vuittons of the world, or you’re forced to buy a T-shirt that says ‘I Got Wasted in Las Vegas.’”

With its price point of $30 to $100 and a strong fashion perspective, 12am Run has tapped into a wide client base, 85 percent of which are tourists. Sakai noted that core sneaker fans have also driven traffic.

“The fact that even [Caruso] was showing interest in sneaker culture and our little world took me by surprise,” he said. “It showed how much noise sneakers are making in retail.”

Sakai is a veteran sneakerhead if there ever was one. His first sneaker store, CRSVR, opened in Santa Barbara, Calif., in 2008, and a second location was added at The Cosmopolitan hotel in Las Vegas a few years later.

When it came to merchandising 12am Run, Sakai said his early buys have been about testing what generates buzz and what the clientele is seeking. He ordered only a few shoe brands, including Asics, Puma, Jordan and Nike, and eight apparel lines.

That focused buying strategy has been a hit with brand partners.

“[Sakai and Murthy are] creative guys, and we knew they would create a groundswell on the Las Vegas strip,” said Colin Brickley, sales and marketing manager of Asics’ lifestyle group. “They have curated their brand matrix with the most relevant footwear and apparel, and we thought it was a great fit for Asics and Onitsuka Tiger.”

Another key difference for the store has been its attention to clothing and accessories. Sakai pointed to Herschel bags, Publish, Huf, Stance and Mitchell & Ness apparel as some of the standout brands. “It’s about being head-to-toe. Guys can wear the same shoe with a different look, so it’s about showing the range of the shoes,” he said.

Nick Woolery, director of marketing for Stance socks, said 12am Run has already been a fruitful partner, thanks to not only its location, but also its attention to detail and buying tactics.

“Now more than ever, the finishing touches are what set retailers apart, and the crew there has done an incredible job merchandising their store in a way that excites people walking around the Strip,” said Woolery.

While Nas’ celebrity credentials certainly helped generate fanfare for 12am Run’s opening, Sakai said the independent store shines because it caters to the locals.

“Vegas is a very unique city in that it is a global destination, but it’s still a small town at heart,” he said. “You can tell a cool story with the Nas partnership and foot traffic from around the globe, but without local support and your day-to-day customer, you don’t have that organic story to tell. There is no brick-and-mortar on the Strip. It’s all major chefs, major nightclubs, major you name it. To be able to do something brick-and-mortar is pretty unique, and people are responsive to the story we’re telling.”

Unlike many sneaker retailers that take phone orders and have an e-commerce operation, 12am Run offers only in-person, in-store sales, which encourages repeat business from area residents. It also brings in local artists and musicians to share Vegas culture.

Additionally, Sakai said, product collaborations have been crucial to giving the shop an edge. Recently, 12am Run partnered with The Hundreds and Starter Black Label on exclusive merchandise. The location also hosts special events, like Q&As with U.S. men’s national basketball team members, and regularly brings in DJs to play from the in-store booth.

Looking ahead, the owners hope to focus on further developing 12am Run’s branded product and may consider opening other shops in key locations.

But for the time being, Sakai is enjoying the benefits of Sin City. “With Nas’ reach, a lot of people make the store a stop on their trip to Vegas,” he said. “They want to see the water show at the Bellagio, they want to go to a certain nightclub, and they want to go to Nas’ sneaker shop.”