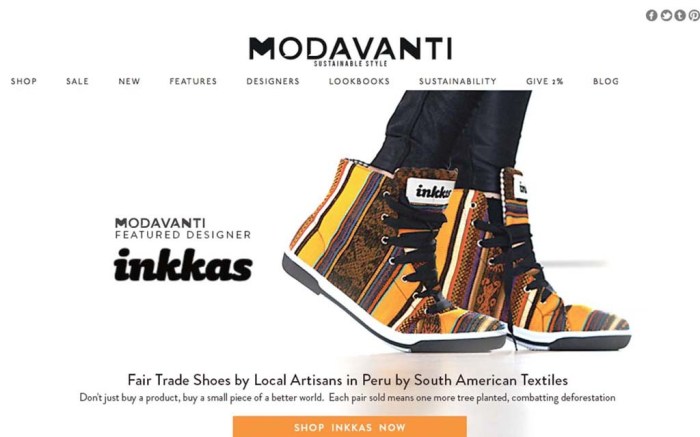 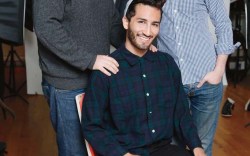 Modavanti is looking to become the online destination for all things fashionable and socially responsible.

Launched in 2013, the Brooklyn, N.Y.-based e-tailer has its roots in an unexpected place: the Arab Spring revolution.

Founders David Dietz and Jesse Ayala, who moved to Cairo in 2011 to, among other things, cover the social movement for PolicyMic as a writer and photographer, respectively, were inspired by the idea that they could make a positive difference.

“After covering the Arab Spring, we wanted to create a business with a social impact,” Dietz said, noting the fashion world presented a great opportunity. “It was a chance to make a difference in the ethical and environmental space — to ‘start something that matters,’ to take an idea from [Toms Shoes founder] Blake Mycoskie.”

With Dietz serving as CEO and Ayala as creative director, the friends were joined by Adam Clancy as operations director, and they officially launched in early February 2013. The site stocks women’s footwear, apparel and accessories identified by one of nine sustainable criteria: eco-friendly, with lower-impact materials and manufacturing processes; energy efficient; fair trade or ethically sourced; handmade; made in the U.S.; organic; recycled or repurposed; vegan; or vintage.

Dietz said most of the site’s footwear, which accounts for roughly 28 percent of sales, falls in the vegan category, from brands including Cri de Coeur, Olsenhaus, Neuaura and Bhava. But fair trade is a growing category, led by new labels such as Inkkas and Ten & Co.

The site uese a drop-ship model, which has its advantages. “With a startup, capital is the biggest thing, and logistically, we’re a small team and we don’t have space to warehouse,” Dietz said.

But there also are downsides. “We don’t get to buy for [the season], so we don’t get the first choice of designers’ wares, and we often only get a few of the top sellers,” he said.

Dietz noted Modavanti eventually aims to do some wholesaling, much like another well-known e-tailer. “With everything we do, we look at who has done it very well, and that’s Zappos.com,” he said. “Zappos started out as a drop shipper and converted to wholesale, and that’s the idea. As we grow, we’d like to wholesale more and use a hybrid approach.”

With that, expanding the site’s shoe selection will be a priority. “Footwear is an important part of having a [full] fashion offering, so we’re focused on adding a few more brands,” Dietz said.

Prices for shoes range from $100 to $300, with the sweet spot around $160. The assortment, Dietz said, is edited to appeal to a fashion-conscious woman in her late 20s and early 30s.

“She’s socially conscious and cares about issues, but she’s also a fashionista, so the brands we target are very much fashion first,” he said.

That clarity of vision is what drew Arti Upadhyay of Neuaura to work with the site. “We like being exposed to a different customer — a fashion-oriented customer,” Upadhyay said, adding that the site’s sleek presentation is another plus. “Their marketing quality is better than other companies. The pictures look like they could be out of a magazine.”

Elizabeth Olsen, founder of vegan brand Olsenhaus, agreed: “I get contacted by a lot of [drop-ship] sites, but I [only] want to align with the ones that know what they’re doing and have a sense of style and a mission.”

That mission includes ambitious expansion. Although first-year sales were under $500,000, Dietz said the site could double its numbers this year, driven by several new initiatives. One major development came in December, when the company acquired Canadian eco-marketplace Ethical Ocean and absorbed that site’s customers.

While it was an ambitious move for the then-9-month-old firm, Dietz said the terms — the site was acquired in a “convertible note/equity deal” — made it a smart way to grow.

“[Ethical Ocean] had a strong community, and we felt it was a great opportunity to join forces and expand,” he said. “When you’re a small startup, it can be hard to grow. This was a nice injection of [customers] and a good boost for us.”

It also brought the fledgling site some expertise since Ethical Ocean’s founder and CEO, Chad Hamre, is serving as an adviser and board member as the company now begins to seeks its first round of significant outside investment. (Initial funding came primarily from friends and family.)

And there’s more to come. Next month, Modavanti is launching cosmetics with between 20 and 25 organic, animal-testing-free and/or chemical-free lines. The e-tailer also debuted last week a partnership with Greenwich, Conn.-based sustainable shop Atelier360 to present the store’s brands on the site. The e-tailer also plans to add men’s apparel, accessories and shoes in late April or early May, starting with four lines and aiming for 10 before the end of the year.

And in the process, Dietz said, Modavanti finally is unveiling its first marketing push.

“We’ve been meaning to do it when we got around to it, and that’s the plan for [next] month, to put our online marketing out there,” he said. “Hopefully, that will further get our name out and increase traffic.”