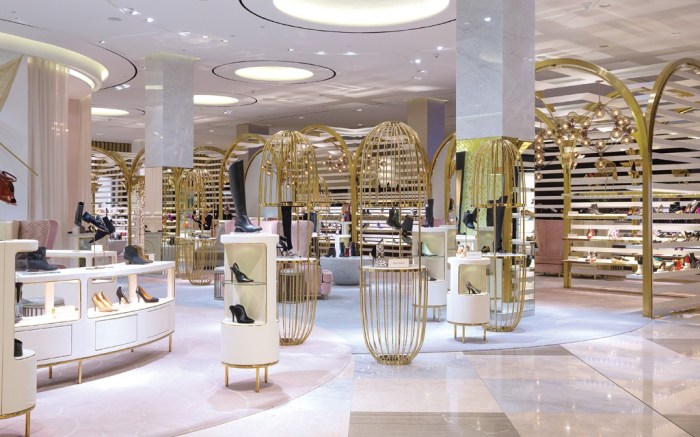 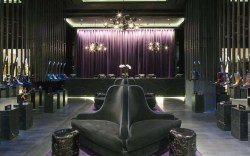 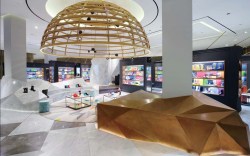 At 96,000 square feet, Level Shoe District in Dubai is betting it is, and the retailer is proving that its diverse selection of 350 brands, ranging from Havaianas and Nike to Louis Vuitton and Christian Louboutin, resonates with footwear-obsessed Middle Eastern consumers.

“The whole idea was to fill a gap in the market, to give choice, width and depth, and to create a place for men and women who are passionate about shoes,” said Patrick Chalhoub, CEO of Chalhoub Group, which opened the store in 2012. “We wanted to create this lively, vibrant place where men and women will come and not only select their shoes but spend the whole day if they want.”

Level executives said the store sells roughly 700 pairs of shoes a day, exceeding initial expectations. About 70 percent of sales come from the women’s category. The men’s offering makes up the other 30 percent.

To differentiate itself from the typical retailer, Level also features an array of services, including a cobbler, spa and Vogue Café.

“We want people to be amazed, surprised and want them to feel pampered,” said GM Rania Masri. “In the global world we live in, our customer is an expert in what he or she wants.”

The shop-in-shops were a crucial part of Level’s first year, giving many luxury brands a powerful platform to enter the fast-growing market. Each individual space is made to look like a separate storefront, which protects brand integrity and allows each label to stand out.

For Stuart Weitzman, which opened a 1,000-sq.-ft. shop at Level in 2012, the prospect offered a major upside — the brand would get real estate in the United Arab Emirates on its own terms.

“It’s the biggest single square footage of luxury footwear space on the planet with a truly unique environment, almost like a shoe village,” said Wayne Kulkin, CEO of Stuart Weitzman. “[Level] is a shoe lover’s nirvana, with more luxury designers housed all under one roof [than anywhere else] and each retaining its own identity with individual architecture and branding.”

British men’s label Harrys of London also jumped at the chance to create an 800-sq.-ft. boutique within the store when it opened. The brand, which already operates a shop in Abu Dhabi, saw the opportunity as a way to expand its ties in the country.

“The Middle Eastern customer is a true luxury consumer, and Dubai is a great market for us to expand our concept of technology-inspired luxury men’s footwear,” said Kevin Martel, creative director of Harrys of London. “And anyone who has been to The Dubai Mall can attest to the amazing foot traffic. It’s an incredible place.”

Beyond the shop-in-shops, the retailer divides its massive space by category. The athletic space, for example, features brands such as Nike, New Balance and Vans, while a contemporary section stocks Sam Edelman and See by Chloé, among others. Brands in the high-end designer area include Prada, Sergio Rossi and much more. (All told, the company stocks about 100 exclusive designer styles each season.)

Emerging talent is another focus for Level. At a high-profile event in October, the store named Paul Andrew, Louis Leeman, Aquazzura, Alberto Moretti and Nicholas Kirkwood as hot designers.

“Our customers look for the latest designs and want to connect with the designers. With the up-and-comers, we enjoy building a community for the shoe lovers,” head buyer Alberto Oliveros said. “They are always up for meeting the consumers, collaborating on special editions.”

For Paul Andrew, the relationship with Level is already proving to be positive, the designer said.

Grenson owner and creative director Tim Little added that a presence at Level has helped grow his brand’s recognition in the Middle East.

“The customer there understands quality and searches it out,” he said. “They like to find the best of each category and value well-made products. Grenson is fairly new there, but our reputation is growing. It’s a market we value very much as we like to sell to people who really care about what they are buying.”

Beyond traditional marketing channels, seasonal themes correspond with a trend, which drives in-store events, social media and pop-ups in store. The theme also is featured in an in-house magazine. For spring, Level identified a Shoe Garden motif, transforming the designer floor into a romantic nature scene and a maze for top sneaker styles.

“Our mission is to make Level Shoe District a reference of success in the industry and in the world, to ensure it remains vibrant and lively, to offer a wide choice and to connect with consumers,” said Chalhoub.