How SoleSpace Does Double Duty 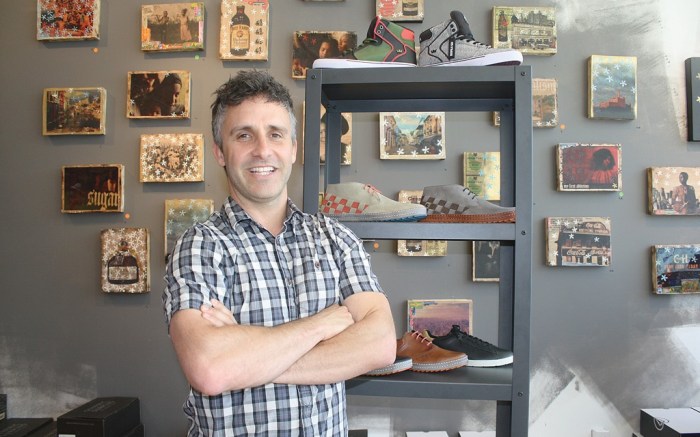 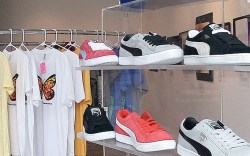 Footwear shop SoleSpace has a split personality. By day, the Oakland, Calif., store offers trend-driven looks for men and women. By night, it is an event space for local artists and philanthropic groups.

In the beginning, though, owner Jeff Perlstein had a different goal for his business. “I wear a size 7 1/2 and had the silly notion that if I opened my own store, I would find more shoes to fit,” said Perlstein, who bowed SoleSpace in late 2012 but abandoned his quest for smaller shoes when he discovered most men’s shoes start at size 8.

The shop is in a downtown location that provides access to an eclectic mix of consumers. Situated a block from a renovated art deco theater, the store taps into a weekend crowd patronizing the area’s restaurants. And the retailer caters to those late-night customers by staying open Fridays until 11 p.m.

Perlstein has curated an assortment of footwear targeted to the trendy urbanites frequenting the neighborhood.

Men’s brands account for 40 percent of sales and include Bed Stu, J. Shoes, John Fluevog, Clae, Frye, J.D. Fisk, Bucketfeet and Generic Surplus. For women, the store offers Miz Mooz, NeoSens, Everybody and Fidji, among others. There’s also a small selection of T-shirts and accessories, accounting for about 10 percent of sales.

Perlstein recalled that securing high-profile labels was a challenge when he first opened. “There were brands that weren’t interested in working with us right away,” he explained. “Vans told us they wouldn’t talk to us until we were open a year.” Now the skate brand is a fixture in the store, which even stocks the label’s more-exclusive Off the Wall collection.

Among the companies willing to sell to SoleSpace early on was Solana Beach, Calif.-based Clae. “Jeff takes the time to understand his customers and his product,” said Geoff Nishimoto, West Coast and key account sales manager for the line. “Clae’s customers like simplicity, quality, and [to maintain a] slight distance from the pack, and SoleSpace is a great amplifier of our style.”

Steve Katz, West Coast sales rep for Camarillo, Calif.-based Bed Stu, also took a chance on the store and has quickly expanded its partnership. “Jeff wanted to start off slow with men’s and has now added women’s,” Katz said.

Though SoleSpace has its share of bigger brands, it has also found a niche with lesser-known labels such as NeoSens and Art.

The store’s balance of both well-known and under-the-radar labels has contributed to its continued growth. Sales for the second quarter of 2014 were up nearly 40 percent over 2013. Looking ahead to the second half of the year, Perlstein expects to sustain that rate of increase.

When SoleSpace isn’t selling shoes, it provides event space for local organizations. The sparse 1,050-sq.-ft. shop features movable shoe racks that can be wheeled away to create open areas for events and then moved back to sell to lingering attendees.

Groups renting the store include charitable associations, as well as artists and filmmakers. Perlstein, whose background includes nonprofit work, emphasized the importance of supporting community groups with limited resources. “We donate space for events we feel may not have the budget, but we admire the work they’re doing,” he said. In addition, the store’s wall space serves as an ever-changing gallery to exhibit work from local artists.

While Perlstein acknowledged his shop faces competition from both e-tailers and department stores, he said the after-hours activities give it an edge. “We’ve built up a loyal following,” he explained. “They care about buying in Oakland and supporting its local businesses. Anybody who comes in can find an event in the course of 10 days that will be relevant or interesting to them.”

His vendor partners are supportive as well. Andre Thompson, national sales manager for J. Shoes in Owings Mills, Md., noted SoleSpace’s evening activities put the brand in front of all types of people. “We love that it’s more than just a shoe store,” he said.